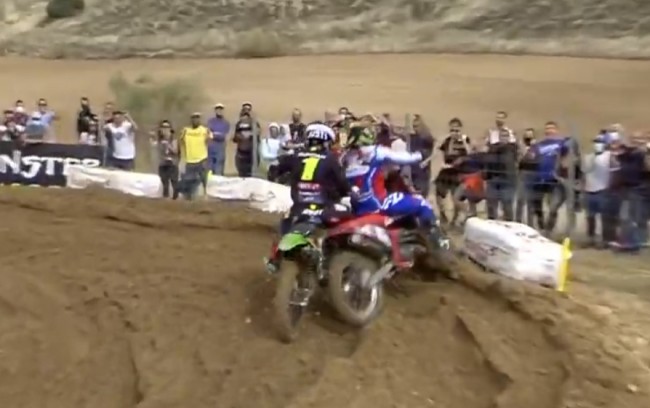 Courtney Duncan showed just how badly she wants to retain her WMX crown with a very aggressive pass on her title rival, Fontanesi, in race one as the duo battled for the lead leaving the Italian on the ground! But neither would win the race with Duncan later crashing out of the lead spectacularly but getting up to barely hold off Fontanesi for second as Ven de Ven took the opening race win.

A battered but determined Duncan came back to win race two after a costly stall by Fontanesi on lap one when she was right on the back wheel of the Kiwi.

Duncan said: “Courtney Duncan: “It was a tough weekend but we got the job done. It didn’t start off on the right foot, first tangling with Kiara and then a huge crash. It was a pretty stupid mistake; I should have known better than that and I only had myself to blame. I ended up in the medics, getting taped up with a deep cut in my finger; I was in pain for the second moto, but I was happy to rebound with the win. Once the adrenalin kicks in you forget the pain. The track was difficult but I rode smooth, rode smart and kept it upright; you had to execute where you could pass and try not to make mistakes; I was able to make my way to the front quickly and put in some solid laps. I didn’t feel spectacular but I got the job done. Now I’m looking forward to the final round next weekend in Trentino. I’ve been in this situation before with the title on the line; I just have to be open-minded and confident. “

See the crash at 1m 36 seconds below:

Meanwhile a furious Fontanesi said: “It’s a podium but it was very bad what Courtney did in race one because she wanted to really hit me and take me off the track and that’s what she did. I think that’s the only way she can beat me so I will aware of that for the next race.”