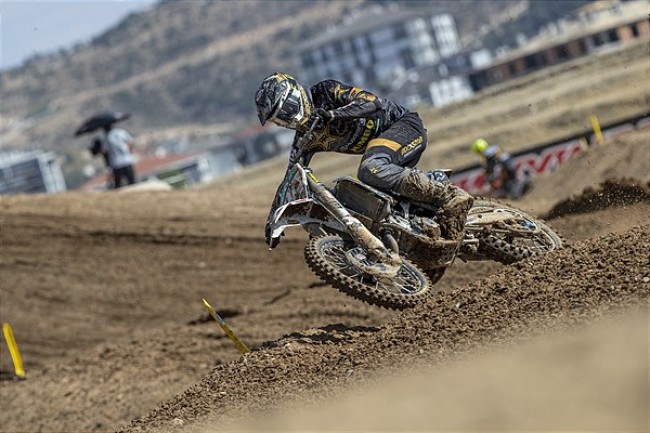 16 year old Kay De Wolf had a very scary moment in the second moto in Turkey jumping off the track but fortunately missing the advertisement banners and being able to absorb a hard landing! De Wolf rode well despite twisting his ankle at the end of the race one for a top ten in both motos and some strong speed on show on the the hard pack.

De Wolf said: “I’m really happy with today. Seventh overall is another solid result for me and despite making a few mistakes, I felt like I was riding really well and with a good flow. I actually twisted my ankle in race one so that was pretty painful, but we strapped it up for moto two and it was ok once the adrenaline took over. It was a pretty fun track today and I’m looking forward to Wednesday.”

Meanwhile teammate Jed Beaton continued his good form with a podium holding off Mattia Guadagnini in race two to stay on the box, saying:  “It feels really good to be back on the podium. It had been a bit of an up and down year heading into the break so to get this podium and put together two strong races, it’s the perfect start to the second half of the season. I had to really dig deep in that second moto, withstanding pressure for pretty much the whole race, so that one felt really good. The team has been amazing as always and this result sets us up really well for Wednesday. My bike was awesome, my starts were perfect and now we can just focus on the motos in a few days’ time and get back up on the box again.”