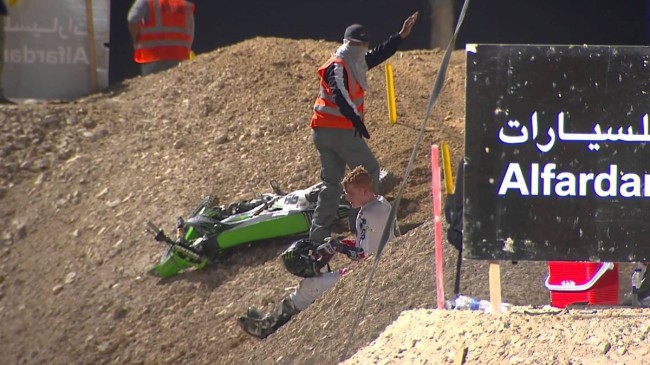 Max Anstie had a horrendous crash (above) while looking ready to go for a podium but thankfully was able to walk away. Anstie later said on social media that the bike stopped half way up the jump and that was the reason for the crash.

It was Anstie and Pocock’s first time on the race bikes in Qatar. They had some reliability problems last year on the Yamahas and another problem on their Kawasaki debut! Hopefully for everyone involved there won’t be anymore and both riders will have trouble free seasons and show their true potential.

There were some other huge crashes at Qatar unfortunately – even for the girls. Here are some of the worst -luckily most riders were not seriously injured.

Nancy Van De Ven had this horrible crash whilst leading race one of the WMX:

The two Watson brothers were riding fantastic but the same jump caught both boy out:

Dylan Ferrandis was going after Herlings in a big to win the overall when he overcooked it coming onto the pit straight: