Video: Charlotte US GP track sneak peak & why it’s the biggest race of the year! 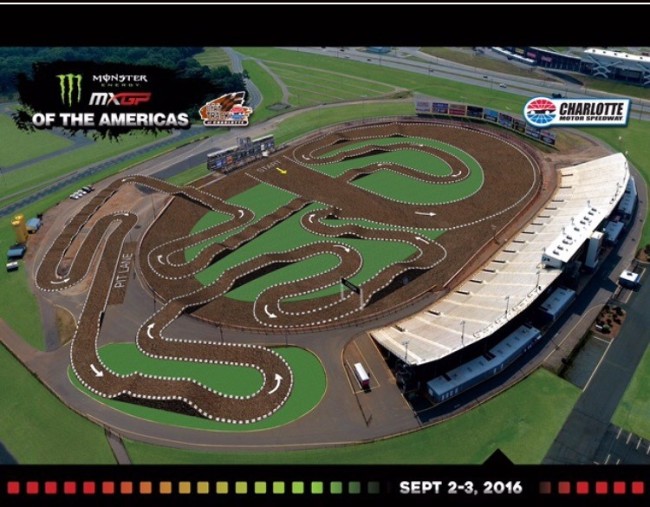 The biggest race of the year is only three days away and you can get a sneak peak of the venue in this video that features Brian Deegan getting excited about the best Americans taking on the MXGP riders.

With the brand new track the Americans get home country advantage but without any prior testing on the circuit as it’s only being built this week.

The expectation is already huge, the 250 National champ in his home state going head-to-head against the MX2 world champ, and both will fight to the end! Add to that the fact Austin Forkner wants to beat Herlings badly too plus Cianciarulo, Savatgy and Hampshire in the mix with the MX2 regulars – there should be some seriously bar-banging racing in MX2.

While the MX2 class seems to be Herlings v America the premier MXGP class seems to be Eli Tomac v the world. Tomac is under massive pressure to uphold American honour. Despite being the fastest 450 rider America has, he has been spanked by a former GP rider (Roczen) all year in his home national championship and you can be sure he won’t want to get beat again by the current crop of MXGP guys at his home GP!

That would be pretty humiliating for Tomac and US motocross since they believe the USA is above the world championship, so Tomac, fuelled by a serious amount of national pride, will be doing everything he can to bring his A+ game and have the US National anthem playing proudly on the podium on Saturday night. He isn’t doing the MXON, so this week and next week at Glen Helen is his chance to restore American pride in motocross and do it in front of their home crowd. But both he and Barcia might get a shock at the depth of talent in MXGP if they get bad starts compared to the US Nationals!

The MXGP boys will know exactly what the US riders want to do – destroy the “Euros” and “prove” America is superior. And with Forkner’s outspoken comments that he can beat Herlings, it seems the GP riders will be all the more motivated to try and gain more respect amongst the US riders, fans, industry and media. The only way to do that, since American riders won’t race the full world championship, is to beat them on their own turf at the US GP!

There is a lot of motivation from both sides and when you have Tim Gajser and Jeffrey Herlings potentially being crowned world champions this weekend as well, it makes Charlotte the biggest race of the season!