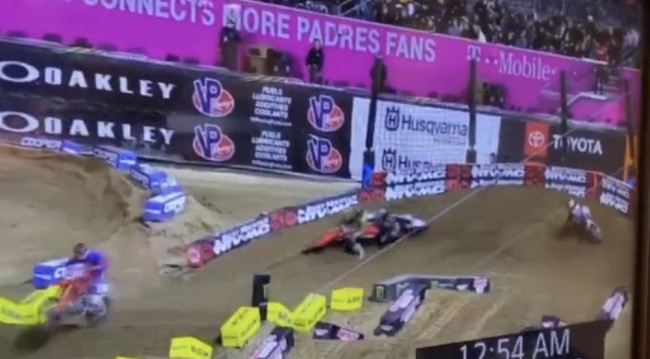 Jason Anderson had been the model of consistency this year with top five results all season – until last weekend in San Diego!

After putting a hard pass on Justin Brayton, the factory Honda man, who felt it wasn’t the first time he had been pushed around by Anderson, retaliated hard in the next turn and left Anderson on the deck!

To Anderson’s credit, he was fine about it, stating, “I started it, JB finished it. No hard feelings and looking to good racing.”

Anderson would ultimately finish 14th, drop to 6th in the points and is now 25 points behind points behind championship leader, Ken Roczen, in what was a costly night for the Rockstar Husqvarna rider.

well somehow this video popped up. Shit happens . I started it JB finished it. No hard feelings and looking forward to good racing 😌 Rubbins racin