Vialle, Prado and Hofer on Loket 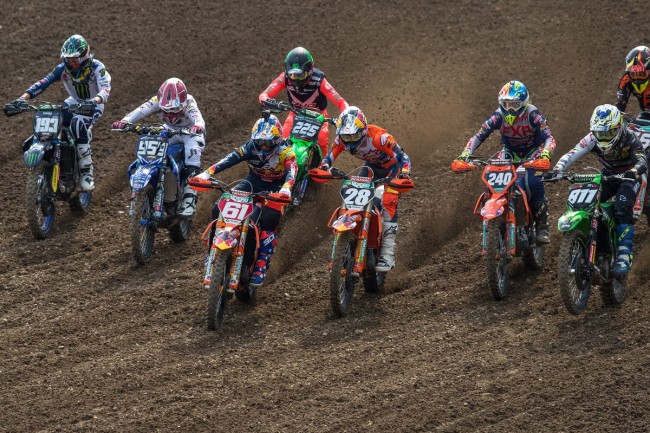 After the Indonesian double header MXGP returned to familiar ground – but still in hot summer temperatures – with round thirteen of eighteen taking place at the weaving, narrow and hard-pack circuit of Loket for the Grand Prix of Czech Republic. The meeting was home to Red Bull KTM’s Summer Party that saw all four of the factory motocross riders splitting homemade pizzas among the media and invited guests. Jeffrey Herlings and Tony Cairoli joined the occasion and then watched MX2 teammates Jorge Prado and Tom Vialle (joined by Rene Hofer making another MX2 wild-card appearance) again hound their rivals with the KTM 250 SX-F.

Loket was also the scene of the 2019 EMX European Championship in 65 and 85cc categories where KTM emerged with the 65cc title thanks to Vitezslav Marek and two podium finishes in the 85s.

On Saturday Jorge Prado and Tom Vialle rode to a convincing 1-2 respectively in the Qualification Heat; the victory by Prado represented his ninth ‘Pole’ of the season and seventh consecutive feat. Decent track preparation saw the Czech soil rougher and bumpier in parts compared to previous editions of the event.

In the first moto #61 streaked away to win by almost ten seconds while Vialle (riding at Loket for the first time) was holding second place until a collision with Calvin Vlaanderen exiting the corner at the end of the pitlane put both riders on the ground and the Frenchman out of the running.

Prado took his 17th holeshot of 2019 at the start of the second moto and completed the formality of his tenth 1-1 from twelve grands prix and eleventh overall success in a row. Vialle was again fast and running as high as second but a sore neck as a result of the accident only two hours beforehand ate into his competitiveness and he dropped back to 7th (meaning 15th overall).

Rene Hofer ended the day with 12th position overall and more valuable experience under his belt which will prove helpful in the rest of his maiden EMX250 campaign. The Austrian went 14-11 to grab his very first FIM World Championship points in what was just his second Grand Prix appearance.

Prado leads the MX2 standings by 90 points with Vialle in 4th place and just 11 points from the top three.

Jorge Prado: “I didn’t feel so good in the first moto but was way-better in the second and it was a great weekend; winning both motos again and making that championship gap even bigger. Lommel next and it is a track that many people ride and I know it well. I won there last year and will be happy to go back.”

Tom Vialle: “The weekend started very good and I had a decent feeling with the track and on my bike. Today was a bit of a different story. I was fast in the first moto and followed Jorge for about twenty-five minutes until Vlaanderen hit me. I couldn’t restart and I had some pain in my neck which affected me after about ten minutes of the second race. Anyway, I am happy with my speed and now I need to focus for Lommel and the sand.”

Rene Hofer: “A solid weekend. In the first race I didn’t get a good start at all but managed to move up to 11th with three laps to go. Unfortunately I made a small mistake that cost me some positions but I still took my first GP points. In the second race I had a better start and some nice battles. 11th is a very decent result in the end. I definitely gained some confidence this weekend.”

Two weeks after the FIM Junior Motocross World Championship some of the same KTM-mounted youngsters were in action at Loket for European honours. Starring on home soil was Vitezslav Marek. The Czech teenager won the first moto on Saturday and then took his KTM 65 SX to another win on Sunday to complete the World and Euro set. Marek headed an all-KTM podium. In the 85s Valerio Lata was 2nd and Quentin Marc Prugnieres took 3rd. The Italian and Frenchman were two of four KTM 85 SX mounted racers in the top five.

MXGP moves from the hard-pack into the fierce sandy test of Lommel for the Grand Prix of Belgium next weekend.