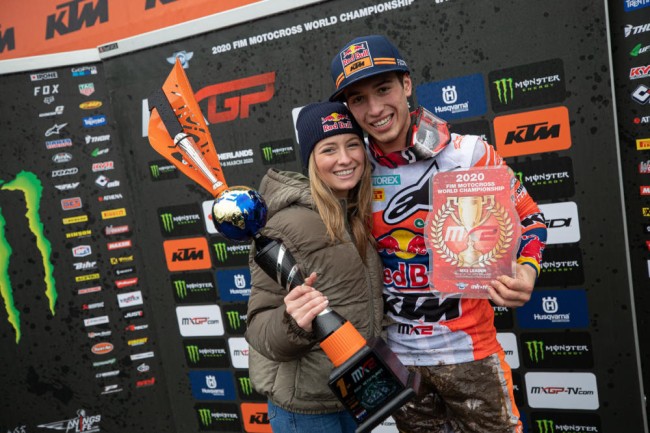 Despite being French, Tom Vialle spent the lockdown in Belgium as the lockdown restrictions weren’t quite as strict there as his home country.

“I’m currently in Belgium, I’ve been training at Lommel in the sand with Joel (Smets). Here we have a pretty tough program for the coming weeks, we train hard in the sand, almost two or three days a week. I have my plan here and that’s why I’ve stayed here”, Vialle added.

In 2018, Vialle had his first full season in the EMX250 championship and had some up and down results but a year later he’s a full factory KTM rider and finished fourth overall in the MX2 World Championship – a huge improvement.

“It’s true (laughs). If you look at it like that, it’s crazy and also for me. In 2018, it was my first season in the EMX250 championship, it was my first time really being part of the GP paddock. Also a lot of tracks I was going to for the first time such as Russia. In the MX2 World Championship, there were a lot of tracks, it was difficult for me but you ride two days in the GP’s so you have quite a lot of riding but to ride on Sunday afternoon when the track is difficult and very bumpy, it was only the second year for me at the GP tracks because in 2017 I only raced two rounds of the EMX250 championship but never on a GP weekend with so many bumps and lines. In 2018, it was my first year riding tracks like that so the results were a bit up and down, it was difficult with my parents and team, we didn’t really have a team, it was more of a family team, you know?”, stated Vialle.

The start of this season has went well for the young French talent, at Matterley Basin he finished second overall and at Valkenswaard he stood on the top step of the podium which means he has the red plate heading into round three when the action resumes.

“It was really really nice. I’ve been waiting for that, last year I won a GP but not a race but already this year I won the first race so it’s good. In the first race I was winning pretty easy but with 3-4 laps to go I made a mistake, in the second race I said to myself in the last few years, okay now I need to win and I managed to do that. The last lap was pretty hard but it was okay. Rene was riding good, also with the weather there was a lot of rain during the second race which made it difficult for me with the goggles. I was behind him and he was riding quite fast, we had 5-10 seconds on the third place guy so the rhythm was good, I didn’t need to attack that fast. I stayed behind him and then the last five laps I pushed to pass him and it was pretty good. It was difficult to pass him before that with the goggles so I didn’t try that much to attack him but it was good to get it done with three laps to go. I really like the track there, also the year before was my first podium and I was riding good. This year the track was a little tougher but I really enjoy it every year, it’s one of my favourite tracks”.

Valkenswaard isn’t a typical track for Vialle but the win shows there his huge improvement in the sand – he was delighted with his weekend and even enjoyed the track.

“Yeah, I didn’t expect to win because I know Jago is really good, I really wanted to fight with him in the sand of Valkenswaard. For sure, to win but to fight with him and battle for the win would have been good for me. I went really good in the first race, I started well and Jago was third on the first lap, I know he’s quite fast but he past me with three laps to go and I had a problem with my goggles with the rain. I was really happy with my riding. In the second race I pushed really hard from the start and I enjoyed the track. It was really hard but I felt really good on the bike and also with the track so the weekend went really good for me”.