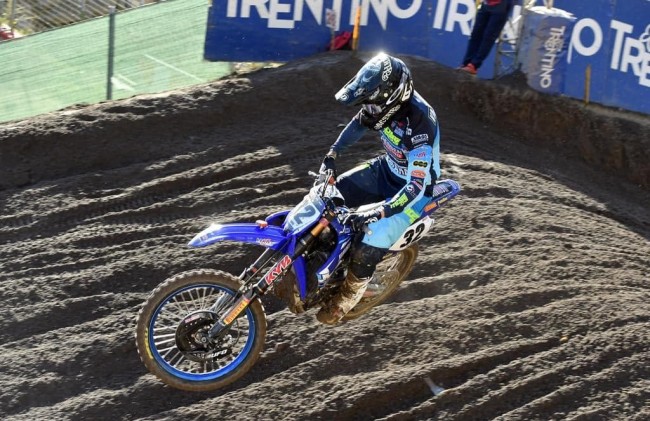 It was time for the final round of the MXGP World Championship of the year – the season has flown in since the season restarted in Latvia after lockdown. The Gebben Van Venrooy Yamaha team have had good results at the Arco di Trento track that also hosted rounds sixteen and seventeen of the series so were hoping to end their season strongly.

Unfortunately, the first moto couldn’t have went much worse for the team. Van Doninck got caught up in a pile up around the first corner and the bike was too damaged to continue so that was the Belgian’s race over.

Lupino did manage a good start as he was inside the top ten and running a comfortable eighth in behind Clement Desalle. However, a stone got jammed in the oil sump which meant he had to retire on the seventh lap. It was a real shame as the Italian had the pace for a solid result.

Both riders were motivated for redemption and to put things right in the second moto. Thankfully, van Doninck avoided any opening lap drama and got himself a good start on his Yamaha as he slotted into seventh on the opening lap. Despite not racing many MXGP races this year, the Belgian had no problems with the intensity at the sharp end in a comfortable seventh. Clement Desalle had a small crash and promoted van Doninck into sixth in what was a great result and it also made him the top Belgian in the race! Despite the first moto DNF, van Doninck still ended up tenth overall at the final round of the series as he showed he was a good fill in rider for the team.

Unlike van Doninck, Lupino didn’t take a good start in the final moto of the season after colliding with other riders. After the first official lap he was buried in seventeenth – not ideal at a track that’s one-lined and hard to pass. The experienced Italian did start making moves and ended up eleventh in the moto, his speed was good and if he didn’t get stuck behind some other riders the result could have been even better. Lupino ended up a disappointing nineteenth overall on the day.

Lupino has also confirmed that it was his final race with the Gebben Van Venrooy Yamaha team as he’ll have a new challenge for the 2021 season but the team would like to wish him well with the future and have been delighted to work with him for the past three seasons.

Brent van Doninck (10th overall): I ended the day with my best result so far in MXGP. In the first moto I got unlucky and went down with another rider, my handlebar got stuck in his wheel and it ripped off my left grip. I was almost a lap down when I was riding and had no grip at all on the handlebar so I decided it was safer to pull out. The second moto I had a better start and felt really good on the bike, I felt much better on the bike each time I went out there. I want to thank the whole Gebben Van Venrooy Racing team for giving me this opportunity to show what I can do; it was awesome spending the week with such a professional team.

Alessandro Lupino (19th overall): For me today was a special day because yesterday I spoke with Emile and Ruud. We knew that today was my last race with Gebben Van Venrooy Racing so I tried to make great results again. We had bad luck today, the first moto was going well and I had good speed battling with Desalle and Cairoli. My engine then broke so I had to stop. The second moto, the start was good as I was fourth but I had contact with other guys so I was almost last. I came back to eleventh and I had a lot of fun riding, but I wanted to give more to the team. For me, this team was a family and I have a lot of friends inside the team so it wasn’t easy to say goodbye to everyone today, but this is life. I am happy to have spent the best three years of my life with them and never say never – maybe we can work together in the future again!