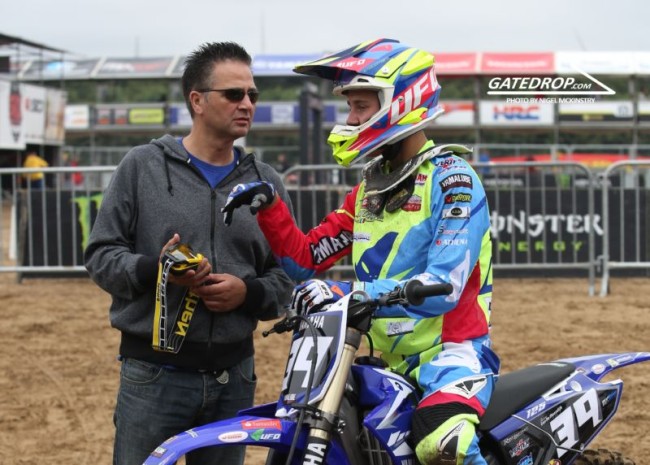 Young EMX125 motocross rider Roan Van de Moosdijk wrapped up his regular season racing over the weekend in Switzerland with another top 10 finish, and flies out later this week to Orlyonok, Russia, for the 2016 FIM Motocross Junior World Championships.  The Dutch teenager finished fifth overall in his eight-race European 125 Championship, and says his goal in Orlyonok is the top of the podium.

“To be world champion, that’s what I want. That’s my goal in Russia. All season my goal was simply to do my best every week. I think we achieved that goal, and it’s always been my dream to be first in the world,” Van de Moosdijk said.

In Switzerland in the deep ruts of a temporarily converted meadow Van de Moosdijk overcame an uncharacteristic slow qualifying time in Free Practice, and launched out of a poor gate pick to consecutive fifth-place finishes in his two race motos. As his EMX125 category races are split over Saturday and Sunday, the 15-year old from Eindhoven got to see track conditions before a heavy rainstorm Saturday night turned the track into a slippery, muddy challenge.

“I’m happy with my first season at EMX125. I’ve learned a lot from the team, from manager David Philippaerts and the mechanics, and I’m proud of our results. At the first race in Kegums, Latvia we got third place, and every week has been a new opportunity to learn and get better,” Van de Moosdijk said.

This weekend Van de Moosdijk will travel with the Dutch Motorcycle Federation team via Moscow to southern Russia, where the 2016 FIM Junior World Championships are set to take place on the Orlyonok Motocross Circuit near the city of Krasnodar. For Roan this is his first trip to Russia, but his fourth motocross world championship event. Previously he competed in the 85cc and 65cc races, but Russia will be his first 125cc title race.

“There’s something special about the World Championships. It’s more exciting, more speed. Everyone is there to do something special, and I am very happy to try and win,” Van de Moosdijk said.

Traveling with Van de Moosdijk to Orlyonok are his father Edwin, representatives from the Dutch Motorcycle Federation, and the chief mechanic of DP19 Racing Official MX Team, Ciro Franzon, who will look after his YZ125 with GYTR parts during the race weekend.

“The Federation already sent the bike on a truck to Russia, so it’s waiting for us when we arrive. It’s my first year on the YZ125 and I can say it’s a great motorcycle. From the first time I rode it the turns and jumps were smoother, and with the mechanics the engine and suspension are more flexible for the different track conditions,” Van de Moosdijk said.

With 31 riders registered for the start in Russia, Van de Moosdijk will test himself and his YZ125 against the best 125cc riders in the world on August 13-14 in hopes of winning his first World Championship title.