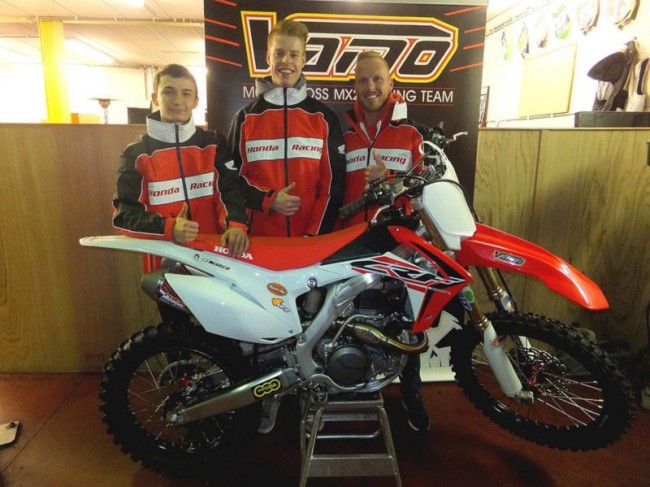 Honda and the Vamo Racing Team have joined forces for a 2017 campaign in the MX2 category of the FIM Motocross World Championship, completing the Honda-supported stable of teams ready for next season.

With riders Michael Ivanov and Lars Van Berkel riding the Honda CRF250R, the team will compete in the MX2 World Championship alongside a programme that will take in the Dutch and Belgian national championships, too.

The 2017 MX2 World Championship season gets underway under the floodlights of Losail, Qatar, on February 25, before the action moves swiftly on to an all-new round in Indonesia the following weekend.

Steven Vandeweyer – Team manager:
“We are really excited to announce that in 2017 we will make the step to the MX2 World Championship with the support from Honda. Our new set up will feature 19-year-old Bulgarian Michael Ivanov and 22-year-old Dutchman Lars Van Berkel, and alongside the MX2 World Championship campaign, the team will also compete in the Dutch and Belgian National Championships. Both riders and crew are extremely motivated to start working with Honda and the CRF250R, and with two talented riders and another season with great looking bikes we are feeling incredibly positive and excited to represent Honda and get our new challenge started.”

Lars Van Berkel:
“I’m very happy that Steven from Vamo Racing and Honda worked together to give me a chance to ride all the European GPs in 2017. This year I did several local GPs to try and get the attention from a team and that actually worked. Now I get the chance from Vamo and Honda and after a few years riding different brands it’s very nice to get back on the bike I actually grew up racing on. This is my last year racing in the MX2 class because of age and I worked hard to get to this point so hopefully I will build further on these year’s results and let the hard work pay off. I am really looking forward to 2017 and want to thank the complete Vamo crew, Honda and all my sponsors who got me to this point so far!”

Michael Ivanov:
“I’m very happy to sign with the Vamo Racing Team and to be supported by Honda. Next year I will race the full MX2 World Championship and I am moving to Belgium this winter to be closer to the team and workshop so I can prepare myself 100% for this new challenge. I am looking forward to start riding with the Honda CRF250R and I’m excited about this new opportunity and challenge.”

Davy Dousselaere, Honda Motor Europe Off-Road Manager:
“We’re really excited to welcome the Vamo Racing Team team to the Honda Racing family for an MX2 campaign in 2017. We have two talented guys with Michael and Lars, and a very committed team with Vamo who have chosen to join us and use the Honda CRF250R next year, and we’re all very keen to get to the first round and get racing again.”