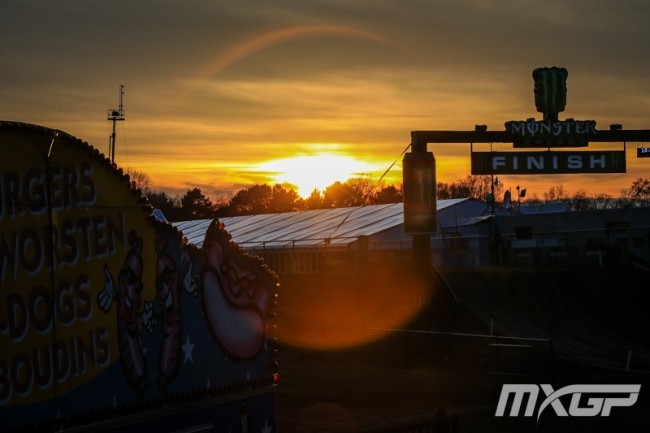 It was looking like today could be a mud race with a lot of overnight rain. However, thankfully the weather took a turn for the better and we were in for a good day’s racing. Valkenswaard isn’t quite as fast as usual due to the heavy rain but the track held up very well.

The sick Aleksandr Tonkov took the hole shot in the MX2 closely followed by Jeffrey the bullet Herlings. Carnage went on down the start straight as Anstie collided with another rider and went down – he has it all to do tomorrow. Jeremy Seewer also had a small crash in the first corner and brought down a few riders with him.

It didn’t take Herlings long to make his move into the lead, he was around Tonkov by the end of the first lap. Herlings ended up winning the qualification race by 36 seconds, going to take some stopping him tomorrow.

It was all going on behind Herlings though, Tonkov, Jonass and Van Doninck all closely followed each other for second place. Ostlund, Vlaanderen, and Zaragoza were all going well just behind the three rider battle.  Brent Van Doninck was the man on the move though, he passed Jonass and was applying pressure to Tonkov. However, disaster struck and his bike expired, this will give him a terrible gate pick tomorrow but he has the speed, possibly the second quickest guy out there.

Ostlund unfortunately had a small crash that cost him, he picked himself up to eventually finish in eighth. Zaragoza the first half of the moto had no problem staying with the front runners but he started to fade, probably due to not being used to running at the front, he ended up in ninth which is still a good ride for the Spaniard.

Ride of the day has to go to Calvin Vlaanderen who crossed the line in fourth, hopefully the HSF Logistics rider has fully healed from his ankle injury as he has the potential to be another front runner in the class.

Tonkov rode well to hold off Jonass for second place, he will be hoping he has enough in the tank for two moto’s tomorrow as he battles with his sickness.

Max Nagl who hasn’t started the season like he did in 2015, however he finally got himself a holeshot in 2016! A very eager Kevin Strijbos was right behind him, after a terrible start to the season he was in the mood to prove a point. Kevin made his way past Nagl on the second lap and immediately pulled away.

After Strijbos there were a train of riders down to around eleventh before it started to spread out later in the moto but it was great to watch at the beginning – it was intense!

Tim Gajser made the move on Nagl for second to show that he is no slouch in the sand and speed isn’t a problem for the MX2 World Championship. However, he suffered a small crash which put him back in fourth sandwiched between Febvre and Cairoli.

Nagl then started to catch Strijbos and it looked like the Belgian was suffering from the dreaded arm-pump. Disaster struck for Strijbos on lap nine as he had a small crash which allowed Nagl to take the lead. Strijbos picked himself back up in fifth position but went backwards as he lost his rythem.

It was starting to get intense behind Nagl between Simpson, Febvre, Gajser, Cairoli and Coldenhoff but that was the way it stayed until the flag.

It is all to play for tomorrow but the top eight all have the speed for the win. However, have Febvre and Cairoli got more in the tank? We will see tomorrow as there won’t be any settling in the main races.

Filip Bengtsson is no stranger in the sand and rode impressively but a late crash meant he crossed the line in eleventh which is still a good ride for the Castrol Suzuki rider.

A mention for Clement Desalle, it’s great seeing him ride in the top ten again with a ninth place finish.

Tommy Searle and Van Horebeek had a disaster of a first lap and were buried at the back of the pack, they both crossed the line in fifteenth and tenth respectively.

Riding the British championship last week seems to have given Conrad Mewse a world of confidence. The day started great for the Brit as he was the quickest in his group during timed qualification.

When the gate dropped in the moto he then took the holeshot and stretched out his lead, a very impressive performance. It looks like he will be a contender for the title.

Hunter Lawrence spent the entire moto in second position – an unbelievable ride on his EMX debut. Not only is the result so good but he looks so smooth and in control on the Kawasaki, it looks like he has spent years in the sand, not just a few months! The future is going to be extremely bright for Hunter, without a doubt.

Maxime Renaux was on the move but the second disaster of the day for Kemea Yamaha, his bike then expired! Valuable points lost for the Frenchman but his speed looks impressive.

Thomas Olsen rounded off the podium in the first moto on-board his Bobo Schmidt Husqvarna, strong ride for the Danish rider.

American, Darian Sanayei didn’t get the best off starts but ended up in seventh with a strong ride, he will improve his speed with more bike time.

Conrad took a great moto victory and will be looking for the same tomorrow, Jacky Martens could be regretting not putting him in MX2 if he keeps these performances up!