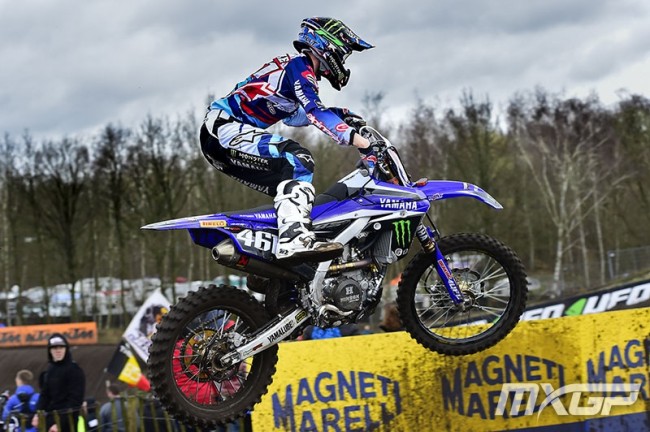 The track: A lot of rain in the early hours of the morning left a sloppy, muddy and challenging track for the riders. However, the rain stopped with just the odd shower which changed conditions the riders faced around the technical sandy circuit.

During the first set of moto’s the speed was slow due to the conditions, Max Nagl called it “not real motocross due to the slow speed”.  However, conditions changed for the second set of moto’s and the track was a lot faster. The fastest lap time in MXGP race one was a 2.07 compared to a 2.02 in the second moto so that gives you some idea.

Great MX2 battle in race two: In the second MX2 moto a fantastic scrap developed for third position. At one stage Tonkov had seven riders lined up behind him. It was an intense battle and made for some great viewing.

Unfortunately Petar Petrov went down and Brent Van Doninck had no were to go and couldn’t avoid the Bulgarian. However, Brent rode a great race to end up in fourth as he made a move on the impressive Vlannderen.

MXGP Race Two: The second MXGP race was one of the best moto’s I have ever watched. Certainly the best moto I have witnessed since the classic MX2 Searle and Herlings battle at Matterley Basin during the 2012 season. Cairoli looked to be in control of the race from Van Horebeek for the majority of the moto but World Champion, Romain Febvre had different ideas. With two laps to go Febvre managed to get past his team mate and set about going after Cairoli.

Romain put everything on the line to get it done, he set his quickest lap of the race on lap 13! He managed to catch and pass TC on the last lap. A phenomenal performance and it really is a big statement to do that at a track Cairoli loves so much. Cairoli shaked his head going over the finish line as he must be very frustrated!   Cairoli raised his speed once he seen Febvre coming and gave it his 100% all – something we rarely see as he loves controlling races. However, his 100% just wasn’t good enough to stop Febvre, Cairoli has a lot of work to do if he wants to win another MXGP world championship as he isn’t the man to beat anymore. Not to end up on the overall podium is a pretty big deal, he needs to find something soon!

MXGP Championship race: At this stage the MXGP Championship is pretty wide open. Tim Gajser answered a lot of questions this weekend with his fantastic performance in the sand. It could have been better too if his bike didn’t stall twice during the second moto. He is a genuine contender for this championship, no dounbt about it.

Max Nagl didn’t start the fly away GP’s in great form but he looks to be slowly but surely buidling his speed back up. He could be back in with a shout.

Romain Febvre takes the red plate with him to Argentina where he will hope to hang onto it for another round.

Herlings 50th GP win:  At just 21 years old, the amazing Jeffrey Herlings now has 50 GP wins to his name equalling Joel Robert’s tally. Jeffrey couldn’t have done it at a better place either, doing it front of his home crowd. I am sure he will remember this day forever, that is now seven GP wins from seven at the venue.  On another note, if KTM want the MXGP title back this guy might be the guy to do it – they should force him up to the class for 2017.