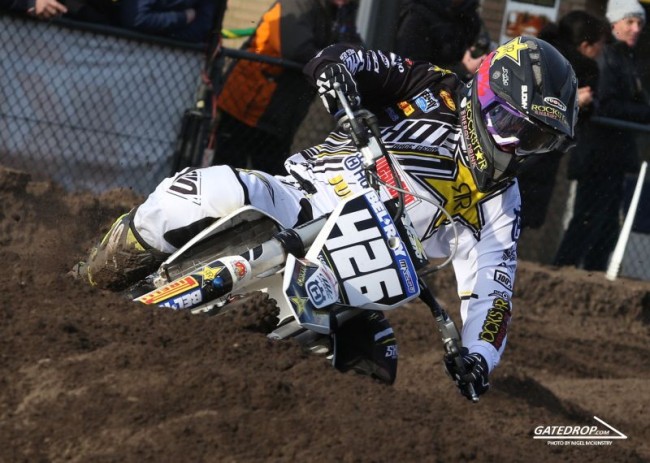 Valkenswaard hosted the first round of the EMX250 championship. The riders had put the hard work in over the winter, it was time to see if the work had paid off. We will take a look at the EMX250 riders that impressed during the course of the weekend.

Conrad Mewse:  A fantastic EMX250 debut for Conrad, it was the perfect weekend for the Brit. He got the ball rolling by going quickest in his group during qualification.  He got the holeshot in the first moto and controlled the moto from the front, he came under some late pressure from Lawrence but it was nothing to worry about as he led the entire moto.

The second moto was a bit more eventful but after starting third he came home with the win. It hasn’t been a great start to the season for Jacky Marten’s Husqvarna squad. Max Anstie was coming in as one of the favourites for the title but hasn’t got his season started yet. Thomas Covington has had his fair share of problems in MX2. Conrad has been the highlight for the team so far this year showing great speed and results. He has the red plate going into the second round at Latvia and he will want to keep hold of it.

Hunter Lawrence: Mewse wasn’t the only rookie to impress as Hunter Lawrence, an Australian sensation made a fantastic debut to the European series on-board his factory Kawasaki machine. Hunter has only been living in Holland for three months, the family have sacrificed a lot by selling the family house in Australia to come live in Holland so Hunter can chase his dream.

Hunter went 2-5 after a few crashes in the second moto for fourth overall. Even though he suffered from a few crashes in the second moto I was impressed with how smooth Hunter was riding, he looked really comfortable. Hunter has already shown in sand that he has the speed to win, when the series hits the hard pack tracks I wouldn’t be surprised to him win – he should be a lot stronger in those conditions. Hunter is determined kid who knows what he wants, he will be a contender for this championship.

Even Heibye: The Norwegian rider is an extremely fast sand rider and he backed this up this weekend mixing it with the fast young guns in the class. Even finished the first moto in a solid fourth place but you had the feeling he was capable of more!

He improved in the second moto and finished second, he even led the race for a number of laps before Mewse got the better of him. Even ended up second overall, a great weekend for him.  It remains to be seen if he will contest the full series but if he wants to get back into GP’s then it would be nice to see him contest the full championship and battle for the championship.

Thomas Kjer Olsen:  Thomas is one of the more experienced riders in the class as this is his third attempt at trying to win the title. However, coming into this weekend, Thomas was battling with a bad virus and I am sure he was happy to just get through the weekend with some decent points. The Danish rider showed a lot of fight during the opening round at Valkenswaard.

Both moto’s were quite similar for him as he started sixth in both the moto’s and worked his way up to third in them. Due to the virus he didn’t have enough on the day for Mewse or Heibye in the second moto so he had to settle for third overall on the Bobo Schmidt Husqvarna. The best opening round he has ever had which is encouraging. He could cause an upset when he is fully fit.