Vaessen update: I had no feeling from the neck down for four minutes 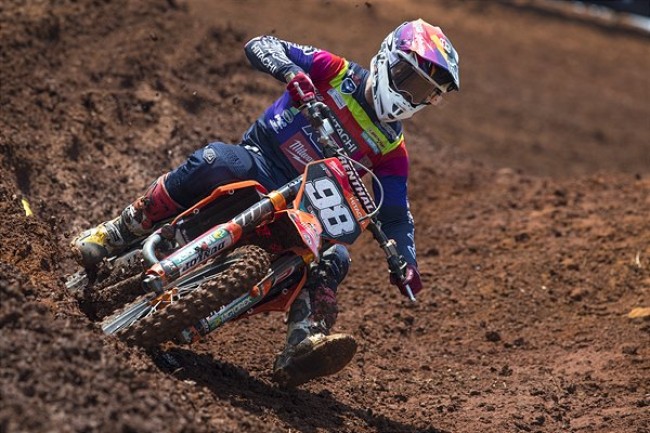 Two back to back MXGP rounds in Indonesia were always going to be grueling, but no-one quite expected the toll that would be taken on the Hitachi KTM Fuelled by Milwaukee team by the end of the two weeks in Asia. Injury had already robbed the series of many of its stars, leaving small grids to fight it out in Palembang last week and the hard pack of Semarang this weekend, but a gutsy display by Vaessen in Palembang saw the Dutchman climb up the world championship rankings – but also pick up a knee injury in the process.

This injury would temper Vaessen’s speed, certainly during Saturday’s practice and qualification sessions. Though not miles off the pace, Vaessen was stuck in the mid-teens and eventually brought his KTM 250 SX-F home in 13th in the qualification race. Sunday’s warm-up was just a single lap, meaning that Vaessen went into the first race under cooked due to the pain from his knee. In a race situation, however, the Dutchman battled hard against both the pain and his competitors to push hard for a top ten finish. After falling away towards the end of the race, the top ten eluded Vaessen, and he finished 13th in the searing heat.

Race two was going to be a struggle, but no-one foresaw the huge crash on the first lap that Vaessen would get caught up in. Championship protagonist Thomas Kjer Olsen fell in front of Vaessen after tangling with another rider heading into the first turn after the gate drop. This left the Dutchman with nowhere to go, and Vaessen was catapulted high in the air and landed heavily, with his bike then landing on him. After some very worrying moments, Vaessen was able to gingerly walk off the track, and will undergo tests back home in Holland to assess the full extent of his injuries.

Bas Vaessen: “After struggling all weekend with my knee injury from last week, the story of the weekend was my crash in the second moto. I ran into Olsen’s bike after his crash and had nowhere to go. After the bike landed on me I had no feeling from the neck down for four minutes and that was a really scary moment for me. The feeling in my legs is back now and it’s also slowly coming back in my arms, too. When I get back to Holland I’ll have a full check-up and see what the medical staff say.”

Roger Magee, Team Manager Hitachi KTM Fuelled by Milwaukee: “Bas struggled in the MX2 qualifying race on Saturday and the first moto on Sunday after picking up a slight knee injury last weekend in Palembang. This, however, was totally eclipsed with what happened in turn one in the second moto when he was involved in a high speed crash after Olsen had gone down just in front of him, and he couldn’t avoid the stricken factory Husqvarna. He didn’t have any feeling below the shoulders for some minutes after the crash, but thankfully the feelings in his legs returned and he was able to walk back to the paddock without assistance. In the hours that passed after the incident, he had some tingling in his upper body but, thankfully, that has now receded as well. Once he returns to Holland tomorrow, he will undergo full medical examinations and tests to determine any injuries that he may have incurred. Many thanks to the medical staff at the circuit and our Team members Ian and Vaclav for dealing with the traumatic situation and offering all the care and support required for Bas.”