Vaessen on Blaxhall – it’s been an up and down day 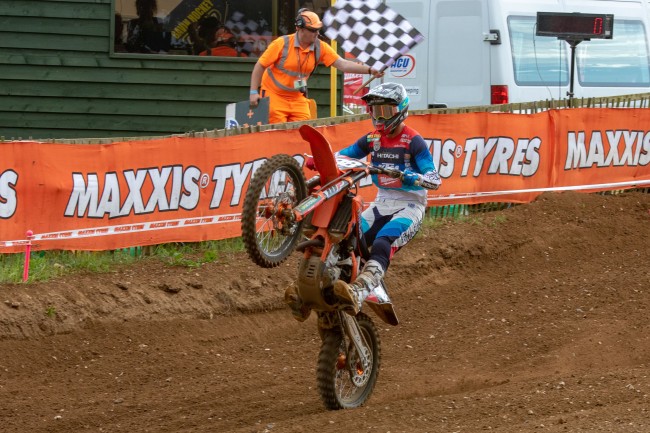 With current British MX2 Champion, Conrad Mewse, recovering from his injury sustained at the previous round at Canada Heights it was down to his Bas Vaessen to recover all important championship points for the Hitachi KTM Fuelled By Milwaukee Team. Vaessen arrived at Blaxhall for the 4th round of the Maxxis British Motocross Championship with his eyes set on the red plate held by Revo Husqvarna’s Alvin Ostlund.

After taking pole position by over a second it was clear from the outset of the day that the Dutchman had the pace to do just that. However, the roll of the dice, or in this case the drop of the gate, did not go in the favour of the number 98 rider in Moto 1, making for an exciting charge under the hot Suffolk sun.

“It’s been an up and down day. The first moto I ran into the gate and had to fight my way back from last position up to second. I got a stone stuck in my rear brake which caused the bike to stall, I tried but could not get the stone out so that was the end of my first moto. That was a real bummer as I was fastest on track.”

“The second moto I was really determined!” said Vaessen. “I got the holeshot and immediately pulled a little gap then just controlled the race. This race felt really good, it was a relief after the disaster of the first moto. I’m feeling happy, I basically need to go out and win every moto for the rest of the year to win this championship, so that’s the plan now.”

Roger Magee, Team Manager: “Today was a day when we really needed two good results to close the gap on the Championship leaders. In the first MX2 moto, despite hitting the slow-dropping gate, Bas Vaessen showed his true speed getting up to P2 with just over a lap to go when his bike ground to a halt due to a large stone getting stuck at the rear brake lever which caused the DNF. It was simply a matter of bad luck, as there was foam installed to try and prevent this situation arising. Moto 2 was just a perfect race with Bas getting the holeshot and checking out. With a day of mixed results for various riders, it’s all still to play for in the 2019 MX2 British Maxxis Motocross Championship as the points for the top six are really close.”