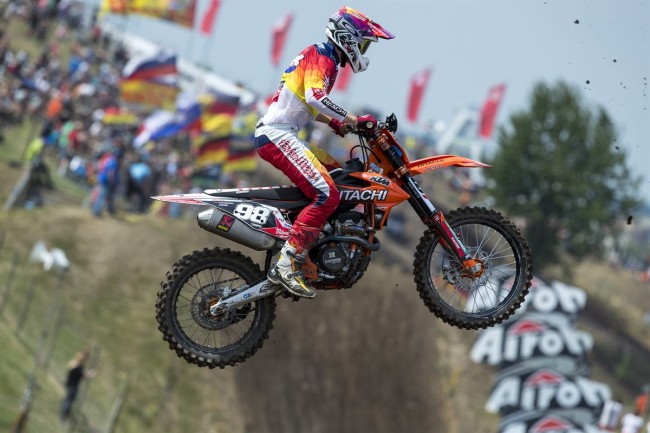 A red hot Teutschenthal greeted the Hitachi KTM Fuelled by Milwaukee team, as Bas Vaessen went into combat for the tenth time in the FIM MX2 World Championship. 35,000 spectators packed into to the tight German circuit, and while the series had taken its toll on championship contenders in all classes, the German fans got their fair share of race entertainment.

Buoyed by a strong set of results in Latvia the week before, Vaessen went into the round high on confidence, despite being the Hitachi KTM’s sole racing representative once again. With a pair of fly-aways fast approaching, it was crucial that the Dutchman kept up this momentum. Hitting the ground running, Vaessen was fast from the off, finishing free practice third quickest and proving that he would be a force to be reckoned with over the weekend. As others got to speed, Vaessen plateaued to finish the qualifying race in 11th, albeit in a tight field.

The strong pace returned during Sunday’s warm up, then continued into the first moto. A decent start was backed up by steady progression in the opening laps, and by midway Vaessen was up to fifth, despite opportunities to pass on the tight Teutschenthal track being few and far between. The podium was within reach, but despite Vaessen’s best efforts he would have to finish fifth, with fellow KTM riders Jorge Prado and Tom Vialle taking the top two spots.

Full of confidence, Vaessen’s race two was full of fight. Despite a strong start, the tough racing saw plenty of scraps with familiar rivals. A consistent pace and impressive race fitness enabled Vaessen to climb to sixth by the middle of the race, but progress beyond this was not possible with Vaessen staying in that position until the flag. Despite the two consistent finishes, strong performances elsewhere meant that Vaessen’s overall position was seventh, though the 31 point haul was a deserved haul for a hard weekend’s work in 30 degree heat and pushes him comfortably into the FIM Motocross World Championship’s top ten.

Bas Vaessen: “This weekend felt very good from the first practice, which is something that hasn’t happened to this point. We made some changes in the free practice and had a good time practice, and I wasn’t too unhappy about the 11th in the qualifying race. In the first race I had a good start and made some good passes in the first few laps to get to the front and felt very good with my riding! I got really close to third but given the track layout and conditions it was hard to pass and I finished fifth. The second moto saw more of the same. I also had a good start and had a lot of good battles throughout the moto to finish sixth. The weekend was great and the team did a superb job, I’m really thankful for their efforts!”

Roger Magee, Hitachi KTM Fuelled by Milwaukee team manager: “Bas continues to improve week-on-week and in Germany he continued to run near the front of the very competitive MX2 class. Race one saw him run finish just under four seconds behind third placed Jacobi on the demanding Teutschenthal circuit. In race two Bas made a really good job of the first few corners getting into sixth on lap one where he was eventually to finish at the chequered flag. If he continues to improve as he has done in recent weeks, then a podium position is now within reach.

“Alexander Brown had to have an operation to repair his shoulder injured in St Jean D’Angely several weeks ago. Conrad Mewse had the cast removed from his broken wrist last week and will hopefully be back in action shortly.

“Next weekend sees the Team’s ‘home’ round of the 2019 British Maxxis Motocross Championship at Desertmartin and we look forward to welcoming current MXGP World Champion Jeffrey Herlings as a guest of the Team in his role of ambassador for Milwaukee.”