Vaessen and Searle storm the Desert! 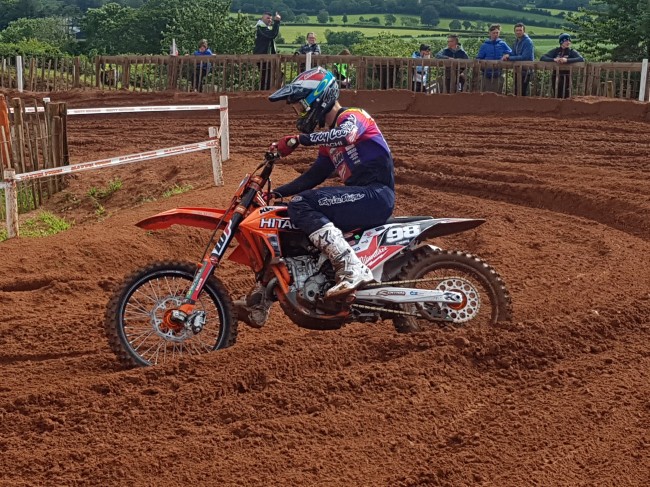 Tommy Searle dominated both MX1 motos at Desertmartin during round five of the British championship but it was heartbreak for Shaun Simpson.

The Scot, just back from a broken hand and just six points behind Searle in the title chase, led race one with Searle second when Simpson’s RFX KTM began smoking a few laps into the moto, Simpson kept going despite the risk of a big crash over a couple of big jumps. Then, with Searle right on his tail, Simpson’s bike finally gave up the ghost along the mechanics area leaving a frustrated Simpson walking back to the pits empty handed.

Searle inherited the lead and went unchallenged to take the win with Jake Millward continuing his good run of form for second. After Mel Pocock went out of third with a mechanical it was local man Jason Meara who moved up to an fantastic third place in the best ride of his career!

With the crowd behind him, Meara moved up from just inside the top ten and showed tremendous speed on the Watt Kawasaki, to hold off Shipton, another local favourite Stuart Edmonds who also had a great riding finishing fifth, with Krestinov in sixth.

Jason’s brother John made it a day to remember by securing seventh after coming from behind following a bad start to make it two brothers in the top seven and a superb reward for the family.

In race two Simpson was out to make amends with the holeshot but just one lap in and unbelievably in front of the mechanics, yet again, Simpson’s bike ground to a halt! Leaving a dejected and totally gutted Simpson walking dejectedly back to his team truck with no points on the day despite leading both motos!

Searle once again inherited the lead and stormed away with the win using some great corner speed to do so on the Big Van World, team Green Kawasaki.

Behind him Jake Shipton was having a strong ride in second but a crash halted his progress with Mel Pocock ultimately taking second place in what was a good performance for ASA KTM rider.

Shipton ended third overall with two fourth places, but it was still a very strong showing for the Crescent Yamaha man, who has been in good for, lately.

John Adamson was a flying all day and well deserved his fourth place overall with James Dunn bouncing back from a below-par first moto to take an unexpected third in race two, demonstrating his natural talent to clinch fifth overall.

Jason Meara couldn’t quite get his rhythm in race two but was still battling for a top ten when he had a hard crash that relegated him 14th, but a noise test failure then demoted him back to 19th and 12th instead of fifth overall just behind brother John who came through to 13th in race two after a last place start.

Stuart Edmonds ended as top Irish rider with eighth overall in a strong performance form the Apico Husqvarna rider who showed he is back on form and in contention for a trip to Assen with team Ireland for the MXoN.

Luke Smith had a great qualifying in 9th and backed that up with 14th in race one until a DNF in race two took him out of the points.

James Mackrel braved the pain of a dislocated shoulder to show fantastic pace at the beginning of race one to run with Meara and edmonds early on, but he just didn’t have the endurance to keep his normal rhythm but fought hard to still take 17th despite the pain, however, he was unable to race moto two.

In MX2 the crowd were ecstatic on lap one when Bas Vaessen riding for local man Roger Magee’s Hitachi KTM fuelled by Milwaukee took the holeshot with three home riders just behind him! Glenn McCormick flicked it sideways in second on the big table-top chasing Vaessen on lap one with another Irishman Jake Sheridan, just behind in third, Ostlund fourth and Martin Barr in fifth!

It was like an Ulster championship with a couple of wildcard entries!

McCormick did his best to hold onto the pace of Vaessen for the first couple of laps before the impressive Dutchman eased away. Ostlund then eventually found a way by a flying McCormick who now had to hold off countryman Martin Barr who was putting the pressure on for third.

Barr made his way by but by this stage Vaessen and Östlund were too far ahead to have any chance of reeling them in and the Crescent Yamaha man settled for third. Behind him Gilbert was hounding McCormick and eventually made the move as the race drew to a close, but McCormick stayed right there with Gilbert, only to lose fifth place with two agonising turns to go as Dylan Walsh, who went down going into turn one, rode an incredible race to snatch fifth on the penultimate corner of the race!

In race two Walsh took the holeshot and rode his heart out to hold off a very determined Bas Vaessen who really wanted to make up more points in the championship. Vaessen tried absolutely everything in a cracking race saw them duel right to the last turn but it was Walsh who held strong to take huge win in a fanatic performance.

Ostlund worked his way into third but couldn’t quite close the gap to the front two even though he was riding a similar pace. Martin Barr finished fourth following a bad start than gave him a lot of work to do to get into fifth by the end of lap one. Barr then set about inching up closer to Josh Gilbert a the front five checked out, but Gilbert then suffered an back wheel issue that made him DNF the race, in a big blow to his title chances.

By this time Barr had too much ground to make up on the front three meaning he just missed the podium at his home race with a 3-4, but it was still a good performance from the Ulsterman.

Glenn McCormick didn’t quite get the start he wanted in race two, but still around tenth and worked his way into seventh, which would have meant sixth overall but a crash cost him five positions dropping Glenn to eighth in what will still be a memorable day for the Unique Fit-out Husqvarna rider.

Jake Sheridan can be very, very proud of his performances in both motos with two ninth places giving him ninth overall, showing what he can do with some good starts and making it three Irish riders in the top ten in MX2