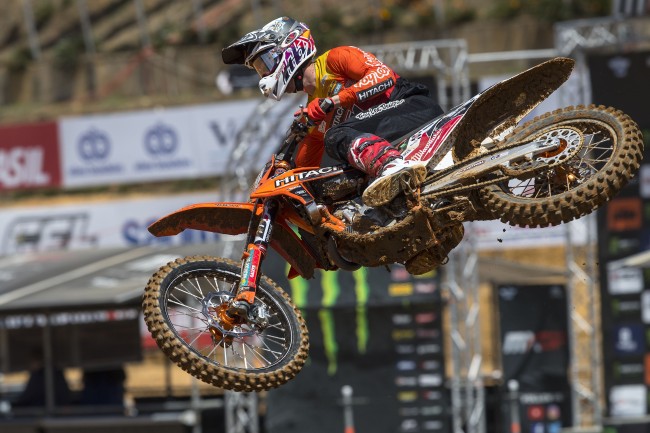 The Hitachi KTM fuelled by Milwaukee team moved from a wet and wild Mantova to dry and sunny Agueda over the course of a week. During that time, the Team signed Alexander Brown to replace Conrad Mewse, who is facing an extended period of rehabilitation to get back to fitness. Brown has been running well in the Maxxis championship, and the shot on a competitive seat in the FIM World Championship series is richly deserved. Big crowds greeted the riders, and under blue skies the Team got back to business around the 1.6km circuit.

Bas Vaessen made a considered start to the weekend, working on set-up of his WP Suspension to develop his KTM SX-F250 throughout the weekend’s opening sessions. Having to adjust from the sodden conditions of the week before to the vastly different terrain of Agueda, the Dutchman climbed the timesheets throughout Saturday, eventually placing himself in the top 15 (in 14th) by the end of the qualifying race. Meanwhile, each lap Alexander Brown completed was another lap of experience on board his Hitachi KTM Fuelled by Milwaukee machine against the top MX2 riders I the world. Individual laptimes were impressive, but stringing fast laps together proved to be more elusive. Brown ended Saturday well down in the pack in the qualifying race, but with a huge number of positives to take from the first day on the bike – especially given that this was his first time on the bike.

Sunday’s first race saw Vaessen shake off his indifferent gate drops, only to overshoot the first turn and fall back into the pack. From there it was a case of fighting through the traffic to regain the places earned in the qualifying race. With four laps to go Vaessen had broken into the top ten, but despite setting his fastest laps at the end of race one by this point further progress was tantalising just beyond him. Brown’s first MX2 race was consistent, and after a good start the rookie hovered around his final finishing position of 24th, shaving seconds off his lap times throughout the 18 laps.

Race two saw Vaessen consolidate a good start with a sound opening lap, only to be taken out contention early into the race. Vaessen was uninjured and remounted, but an errant stone locked in a sprocket, forcing a disappointing DNF for Vaessen. Brown, however, put all that he’d learned in the first race into practice in race two, and fought hard throughout the race in the late teens, only to drop in the last few laps to a point scoring 20th position – a very creditable performance in Brown’s first world championship meeting.

Bas Vaessen: “Saturday started off slow, with the Team making some changes to my suspension to feel more comfortable as I was having quite a hard time to adapt to the soil. Sunday was a lot better and found the right set-up in the free practice. In the first moto I had a good start but missed the first turn and re-entered the track around 20th position. I put my head down and had good speed and made quite some passes to finish in 10th place. In the second moto I had a good start and was riding around 10th until I got taken out by another rider and a lap later a stone got jammed in between my chain and sprocket with resulted in a DNF. The team and, especially, WP Suspension did a very good job this weekend and I’m looking forward to the next GP.”

Alexander Brown: “This weekend was very good from start to finish, it’s been a great experience. I felt like my speed was good throughout and I just need some more intensity and fitness and I think I can be a lot better on this stage. I’ve learned so much over the course of the weekend, and I’m pleased with the progress I’ve made. I could not be happier with the bike, mechanic and team and I’m looking forward to heading to France to improve on the base that I’ve put down here.”

Team Manager, Roger Magee: “With Conrad Mewse’s wrist injury, we decided to give KTM rider Alexander Brown the opportunity to compete in MX2 GPs for the rest of the season – and thanks to Dylan and Apico for agreeing to the change. Even though he didn’t have the opportunity to test the bike before the GP, he settled in really quickly at Agueda and improved steadily over the weekend, scoring his first World Championship point in the second moto. Bas Vaessen continues to improve week on week and scored a hard fought tenth in the first moto. In the second moto, he again looked to be comfortable in the top 10 until he was taken out. Hopefully, at next weekend’s GP in St Jean D’Angely, France, both riders will continue to show their potential.”