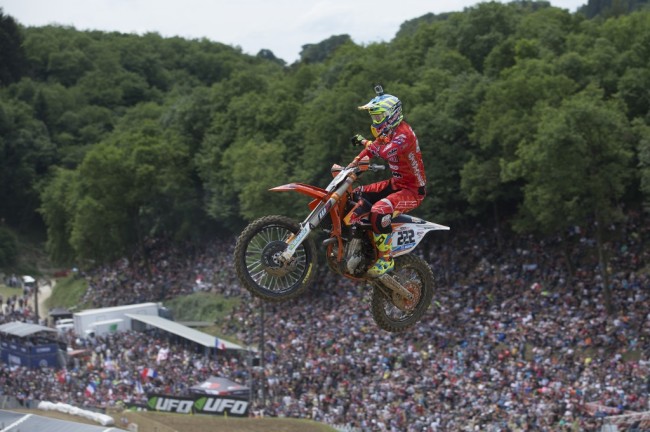 It was quite a day at Maggiora and not all for the positive.

The main man of the event Antonio Cairoli went down hard after he hit a kicker went to the hospital to get an X-ray on an injured arm. Fortunately the arm was not broken but is badly bruised, however Cairoli will try to race tomorrow to keep his title hopes alive.

Meanwhile Clement Desalle’s comeback didn’t last long, he didn’t make it to the qualifying race after his injured knee proved too much. Desalle will now miss the German GP as well.

All of this bad new takes the pressure of championship leader Max Nagl, who inherited the lead after Cairoli’s crash and took the win. Nagl is now very much the firm favourite for the title.

Jeremy Van Horebeek rode well for second and could be a contender tomorrow, the track will suit his style and if it rains it might help the Belgian even more.

It was another brilliant ride for Shaun Simpson in third and the Scotsman must surely be on a few factory team’s radars now!

Further back Gautier Paulin who was second in timed practice had another disaster at the start and went down in turn one. But he came back through to sixth and is confident for tomorrow. He just needs to get out ofe gate!

Glenn Coldenhoff was impressive in fifth while Bobreyshev was again on form with fourth.

Tough luck for Christophe Charlier who was fourth fastest in timed qualifying only to have a front brake issue in the race and was forced to DNF.

In MX2 Jeffrey Herlings won from Valentin Guillod but the Swiss rider kept the Dutchman pretty honest until the last couple of laps. Herlings though is beginning to find his momentum again.

Jordi Tixier was third yet again with Gajser fourth and a back in form Tonkov fifth.

Davy Pootjes made his GP debut on the factory KTM and impressed with 11th on a track that isn’t exactly dutch sand! Damon Graulus also impressed out of EMX2 with a fine eighth place and it was good to see he had no ill effects after his ugly crash with Guillod at the French GP.

Rain is forecast for tomorrow so there could well be more surprised in store but let’s hope there is no more injuries!