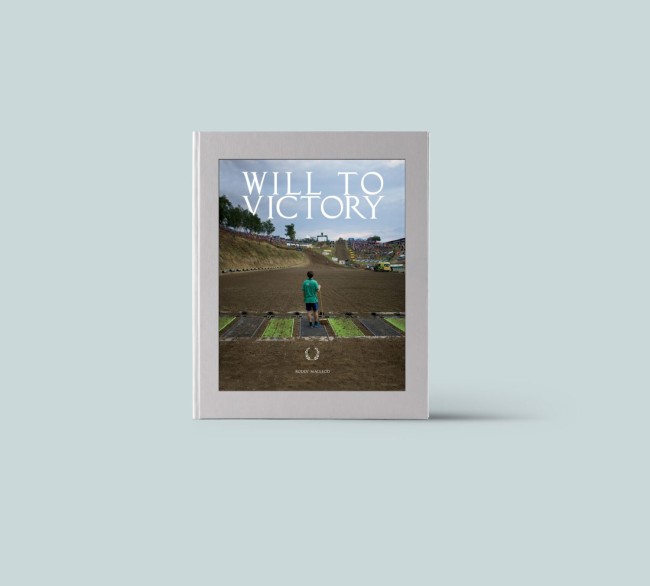 Independent grand prix motocross photographer, Roddy MacLeod, announced today that his new book, Will To Victory, is available for pre-ordering effective immediately. MacLeod has spent the last year preparing for and documenting the 2018 F.I.M. world motocross championships and is in the final stages of preparing the book for print. Printed in limited numbers, the first 500 customers pre-ordering the book will receive their copy signed by the author, plus a free signed print of the famous track in Namur, Belgium. Orders will be fulfilled on a first come, first serve basis with deliveries beginning in December.

Will To Victory is a large (28,5 x 35 cm/11.2 x 13.7 inches) format, high-quality photo book printed on special archive grade photo paper by one of Italy’s leading photo book printers. It includes exclusive interviews that reveal insights into the minds of some of the greatest riders the sport has seen. Multi-time world champions Harry Everts, David Thorpe, Joel Smets and Stefan Everts, plus multi-time British and Irish national champion Gordon Crockard, all open up about their mental and emotional challenges reaching the top of the sport.

MacLeod is himself a former professional motocross racer in Canada and the United States, though he admits his successes were limited. “I started at the bottom like everyone, but I read a quote by Jim Holley who once said: “Anyone who really wants to make it to the Pro class, can” and I made that my personal goal in motocross. I never thought of it as a profession, but I loved racing and was able to reach a good level and learned many lessons about achieving success that I used later in my career. In this way, motocross gave me my start in life. With this book, I feel I am giving something back to the sport.”
Nearly all of the photography is from the 2018 grand prix season capturing key moments from Jeffrey Herlings and Jorge Prado’s championship runs as well as the other stars in grand prix racing. The book includes a special feature showing us what it is like today under the HRC factory awning with rising MX2 star Calvin Vlaanderen at the Swiss grand prix. Additionally, Will To Victory includes never before published photographs from MacLeod’s archive of Stefan Everts winning his 10th world title in Namur, Belgium. In all, the book is a fresh take on the culture of today’s grand prix racing and a deep dive into the mind of world champions.

Will To Victory is a self-funded and self-published effort by MacLeod who shoots exclusively with Leica cameras. “It was important for me to work independently,” says MacLeod, “and to do that, I had to fund the project myself. But that allowed me to photograph and write according to my own ideas. I also decided to self-publish the book because no profit-minded publisher would make a motocross book in this quality. As for using Leica cameras, they are not generally used in sports photography, but they produce uniquely beautiful photos and I think the sum of these decisions have contributed to a book that is itself unique in the world of motocross.”

Asked about his ambitions for the book MacLeod said, “I’m a lifelong fan of motocross so my goal from the beginning was to make something that I would want to own myself. Very few photographers and writers get a chance to do a project like this and I believe if you love motocross and you love photography, you will also love this book.”
Pre-orders of the book are available now on www.willtovictory.com.