Under the radar: Shaun Simpson 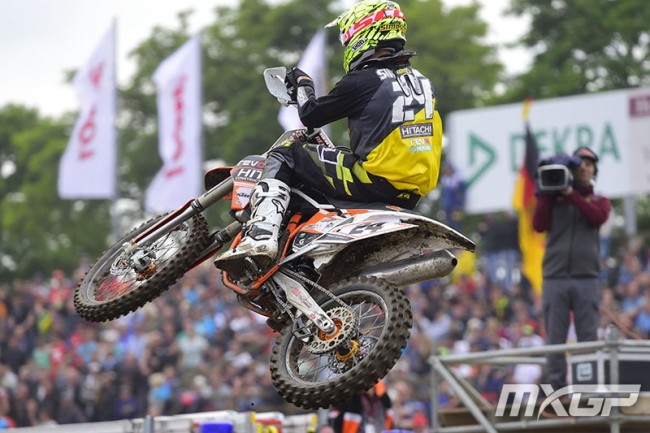 Shaun Simpson is having a great campaign so far this season in MXGP. This is Shaun’s fourth year in MXGP after moving up from MX2. His first year in MXGP he secured a ride with LS Motors Honda(now known as 24MX Honda), Cosworth Yamaha and now with Hitachi Revo KTM – his second season with the team.

Shaun’s first few years in MXGP did not go as expected as he used to ride to defensive, you could see he felt threatened riding against the best riders in the world. However, the last two years since he has went to Hitachi Revo KTM he rides a lot more attacking and we have started to see the best of him. If Shaun gets a bad start now he will be the rider on the attack trying to gain as many positions as possible and if he gets a good start he will hang it out with the guys at the front for as long as he can.

Shaun is pretty much a privateer as he works closely with his Dad and they do everything together. They even built a new race bike before the British GP this year – you wouldn’t see much of the top stars in MXGP do that! The following video was released last week of Shaun and his Dad doing a bike build which is pretty cool.

Simpson is currently seventh in the world standings which is pretty amazing for someone without all the factory help. Shaun is also a lot more versatile this year, in recent years if he felt the track didn’t suit him then he might have a bad weekend but he has been a lot more consistent this year.

So far this year we haven’t seen too many tracks that Shaun would have loved but he is still getting some great results so it shows he isn’t letting the conditions of the track affect him too much this year. Matterley Basin proved that is he capable of running at the front at any track as it wasn’t too his liking and even in Germany he managed a sixth and a ninth (after a crash), which are good results for the Scot.  The fact that he was disappointed about Germanys result shows that he has higher expectations this year.

Shaun has recently stated that his Dad would like to take a step back in future if it is possible – he has put a lot of work in. This will be possible if Shaun can land himself a Factory ride for 2016, is it possible? There is no doubt about it, Shaun is a wanted man in the paddock. Factory Kawasaki, Yamaha are realistic options for the Scot in 2016.

Simpson has always been a family man and enjoys having his brother and father work with him, would it work with a factory team? I believe if the Factory team listens to Shaun’s wishes and give him exactly what he wants then it could most definitely work and we could see him at the front a lot more. A factory bike makes a huge difference these days, especially as the level is so high and Shaun would be the perfect second rider for a factory team.

Even though Yamaha and Kawasaki are being linked to the Scot I believe that Shaun would be the perfect signing for Ice One Husqvarna, that team is more laid back than the other factories and it would suit Shaun down to the ground. However, having said that Yamaha are now more laid back than what they used to be and listen to the riders needs more so that would also be a good move.

Going back to this season, tracks are coming up the calendar that should suit a lot more. Latvia, Assen and Lommel are all sand so he should go well there, don’t be surprised to see the Scot get a few overall podiums before the end of the season – that is all he needs this season to secure a factory ride in 2016.