Ulster MX Preview – McCullough is back! 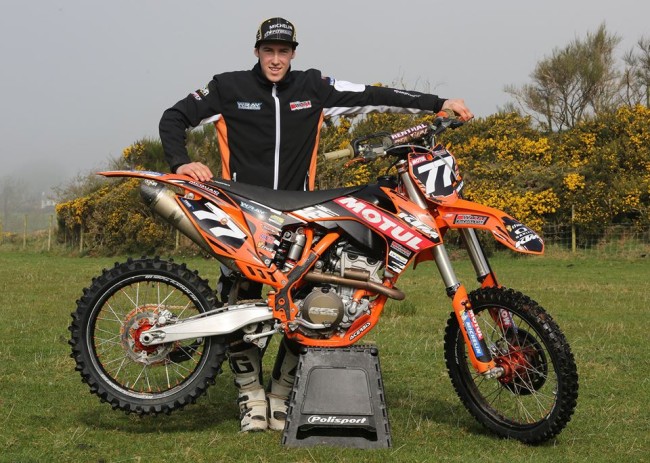 The 2016 MRA Motocross Championships kick off with their now traditional Easter Monday date at Desertmartin hosted by the Cookstown Club.

After a successful opening round of the MCUI Irish Championships last week, it looks like being a great year for the revamped series.

In the Norman Watt Motorcycles Premier MX1 Class, it looks like Stuart Edmonds on his CCR/CCM Racing TM450 is the man in form after his triple win in the Irish, it’s great to see the popular Dubliner back on form on home ground.

Reigning Ulster Champion Portavogies Robert Hamilton chased Edmonds home on his Risk Racing Europe Yamaha machine, and his speed out of the gate means he is always a contender, along with Lisburns Richard Bird, the reigning Irish Champion only carding a fourth on his Five5 Motorsport/Watt KTM, with long time rival, and come back man Wayne Garrett on his KTM fifth, the Comber man taking a canny start to the season.

Two men to watch are the TMC Watt Kawasaki mounted John Meara, the Loughbrickland man showed impressive form at the opening Irish round, and another returnee from GB racing, Gary Gibson from Ballygowan on his S.Scott/Watt Kawasaki.

However, one man to watch will be the returning multi Irish & Ulster Champion Phillip McCullough, the big Ballymena man making a comeback after nearly 10 years out of the saddle in preparation for his challenge on the British Veterans Championship, Phillip has the talent and determination to upset the apple cart, always a fan favourite, and never too far from controversy, he will certainly add spice to the day.

The nuttravel.com Premier MX2 Class may be without the Champion as Glenoe man Glenn McCormick injured his knee last week and may not be fit to race the Agnew Recovery/Watt KTM, however, his main rival Jason Meara on the Motul/Watt KTM is showing very impressive speed and will be hard to beat, although young Belfast lad James Mackrel is maturing well on the Risk Racing Yamaha, and teenager David Galvin from Cork is impressing in his Adult debut year, and if Newtownards man Jordan Scott can find some consistency to go with his speed on the HTM Off Road Husqvarna, he could definitely trouble the podium.

In the Precise Protect Insurance Semi Expert MX1 Class, Ballyclare man Paul Atkinson seems to be the man to beat on early season form, he has swapped his usual KTM for a Husqvarna and seems to be enjoying the change, while familiar names such as Jonathan O’Neill form Crossgar on his Yamaha, Ashley Allerton and Kevin Donnelly are snapping at his heels.

The Matheson Contracts/Laverty MX Semi Expert MX2 Class has some less familiar names at the sharp end, with Aiden McDonagh and teenager Jack Daly at the front, but Karl Thompson from Carrickfergus and youngster Cailum Meara from Loughbrickland will be up there too.

The Russells Motorcycles Clubman MX1 Class had a familiar look at the Irish Championship too, with Fintan Fallon running out the winner ahead of John Martin, and Bangor veteran Mark Lemon, with Stephen Maitland and Kieran Gallagher sniffing round the podium as well.

Spence Racing Clubmans MX2 was won last week by Tony Conlon, with Gerard O’Boyle second, and Owen Fitzsimmons third, but again, Sean Laverty was a double winner with a dnf ruining his day, and Ryan Gowdy in there too.

Racing starts at 11.00 on Easter Monday with a new format to look forward too, the prospect of full gates in the fastest classes, and the effects of the new marketing strategy helping the already excellent circuit, it promises to be a great days racing.