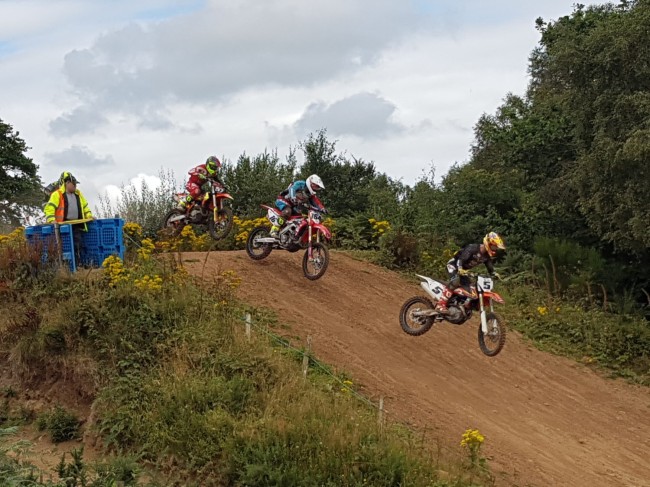 Bird won all three races but had a great battle with Sean Devlin in race one that only ended with two laps to go when the Risk racing Honda man Devlin made a mistake letting Bird into the lead.

Devlin was up front again early in race two but another mistake sent the naturally talented rider back into the battle for the top five leaving Bird on his own up front.

Jordon Scott rode well all day for second overall and kept Bird honest in race three, doing his best to keep the new champ in his sights.

Bird said: “It’s good to get it with a round to go, it’s just a pity some of the boys got hurt at the start of the year but that’s the way it goes sometimes, it’s a tough aul sport! But no it’s definitely good. It was tough out there today it was just about getting away at the start and trying to keep it upright.”

MX2 was all about Jordon Keogh. The Kawasaki man won all three races and even survived a last lap passing attempt from Calium Meara in race two to take the win!

Keogh has bounced back well from his injury at Seaforde and has given himself an outside shot at the championship going into the final round after a tough day for series leader James Mackrel.

Riding a Honda, Mackrel rode well in race one to come back from a mediocre start and almost cach Keogh for the win. But race two didn’t go to plan. Running second and once again on the back wheel of Keogh, Mackrel had a huge crash entering a fast, left-handed bowl-turn that left the teenager down for a while before slowly circulating for points until the checqured flag.

Mackrel bravely tried to race the third moto, but was in obvious pain especially in braking and landing zones but scored 14 valuable points, giving him an unoffical 18 point lead going into the final round.

Calium Meara was on the gas all day, winning all three Grade B motos and showed he had the raw speed to run with Mackrel and Keogh at times during the day.