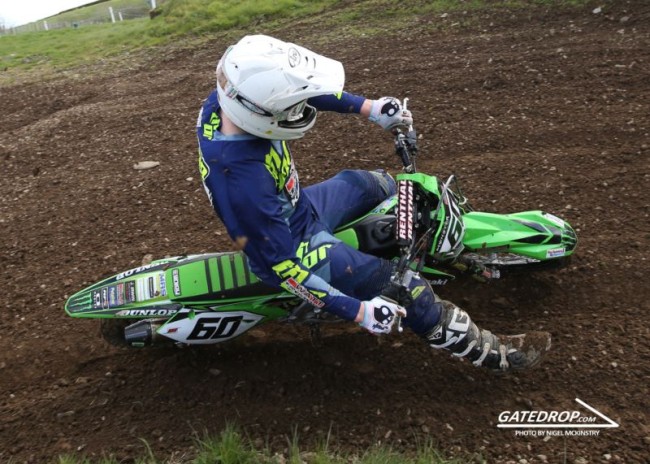 Seaforde hosted the second round of the Ulster Championship of the 2016 season!

Ryan Adair grabbed the hole-shot in the first main moto of the day! It didn’t take Richard Bird and John Meara too long to pounce and they had a nice battle for the lead. Meara took the lead and tried to make a break. However, at around the ten minute mark, Bird was able to pass him back, John lost traction in the corner and went down. This allowed Jason Meara to get into second after he suffered from a bad start. Jason was able to close the gap down and shoved it down the inside off Bird. A determined Bird didn’t give up though and fought back. It was a close battle, heading into the last lap it looked like it was between one of them for the win. However, drama on the last lap as Bird made a move but they both collided and went down! This gifted John Meara the win – a very dramatic moto!

When the gate dropped for moto two it was Jason Meara with the hole shot from Richard Bird. Both riders set a blistering pace and pulled away from John Meara in a distant third. The race was at the front with Bird finding his way past Jason Meara. Jason responded as he often does and was able to win the second moto. Bird rode an impressive race to run with Jason considering Jason beat him on a 250 at the first round of the Irish when Bird rode the MX1 class.

In the last MX2 moto off the day it was fast starting Richard Bird with the hole-shot. It didn’t take long for Jason Meara to make the move. Sean Devlin who has been away from the racing scene for a number of years showed tremendous speed and held third for half the moto before John Meara got him but he stayed with him. It was a great ride for Devlin, it’s great seeing him back racing – shame he quit in the first place as he has the talent. Jason Meara took the moto win that gave him the overall just by a point over Richard Bird, John Meara was just a point further back in third overall.

The MX2 class provided some great racing all day long. It’s nice to see Richard Bird and John Meara compete in both classes. It’s a shame that Hamilton and Garrett don’t compete the MX2 class and with a fit Glenn McCormick – it would be great!

When the gate dropped for the first MX1 moto of the day it was Wayne Garrett who got the hole-shot. However, Robert Hamilton made the move on Wayne around the second corner. It was all going on between the top four for the entire moto, Hamilton, Garrett, Meara and Bird were all separated by just four seconds at one stage. Hamiltion rode fantastic under intense pressure from Garrett to take the win and Bird dropped off in fourth as the moto went on. Jordan Scott rode well to secure fifth on his HTM Husqvarna.

There was a lot of carnage on the first lap of the second moto, Hamilton went down at the start and that was his race over – hero to zero! Bird also had problems and was right at the back of the field. John Meara was riding brilliant out in front and was in control of a good lead over Wayne Garrett. Bird was flying and was into the top seven after three laps but then he crashed and didn’t finish the moto. Jordan Scott rode brilliant to end up third ahead of Ryan Adair who was having a solid day at the Seaforde circuit.

Heading into the last moto it was all to play for the overall win. John Meara led on the first lap but then he dropped it towards the end up of the lap, this allowed Hamilton to take the lead from Garrett. Meara got back up in fourth but quickly made his way past Bird who was struggling from his crash in the previous moto. With five minutes to go we had an epic three way battle for the lead! Meara was flying on his Watt Kawasaki and made the move on Garrett. He applied the pressure on Hamilton and made his way to the front. Hamilton tried his best fight back but just couldn’t do it, only 0.5 seconds separated them going over the line. This moto win give John Meara the overall win from Wayne Garrett and Jordan Scott rounded off the podium.

It was a fantastic days racing, now we turn our attention to the Irish Championship at Desertmartin this Saturday! Gary Gibson will be back to contest that race to add even more excitement.

Jason Meara (MX2 overall winner) –  “I had a good day. It was a bit unfortunate in the first racegoing down on the last lap but I’m happy with my speed and my fitness“.

John Meara (MX1 overall winner) – “Today went pretty good. I got my first premier mx1 ulster race win followed up quickly by another which gave me the overall for the day so I’m pumped for that. In MX2 I need to find a bit more speed to run with jason and richard but doing 6 motos in a day is very tough. Massive thanks to Watt motorcycles, pro performance fitness, for runners by runners, thevisorshop.com, hogg furniture, j.irwin car sales, MBR racing, malcolm Rathmell and Moto shox“