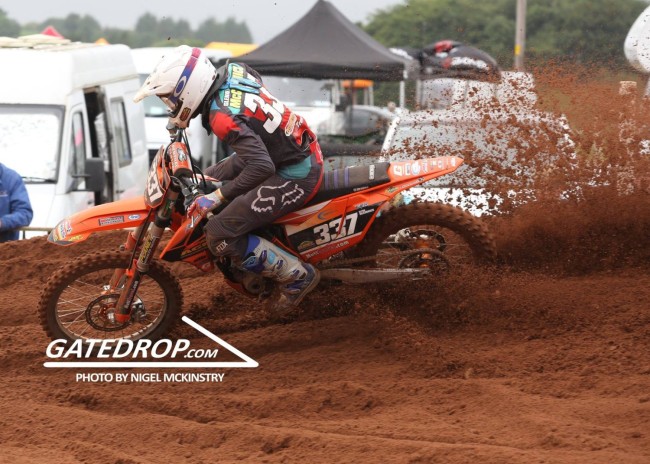 The Nutt Travel Premier MX1 Class is led by Lisburn’s Richard Bird on his Five5Motorsport KTM on 211 points from Wicklow man Jim O’Neill on his similar machine on 176 with Greyabbey Smoke Vent KTM rider Craig Brown a distant third on 138, while Banbridge’s Ryan Adair is 11 points adrift on his Adair Building Services KTM, the last round was enlivened by a visit from Neville Bradshaw who put on a great show at Tandragee on the Suitor Brothers Kawasaki, if he makes a n appearance expect some great racing round a circuit which will suit the South African

In the Precise Protect Premier MX2 Class, Jason Meara from Loughbrickland the Championship favourite is out for the year following a serious crash which injured his back, so get well soon Jason, meanwhile, Dundonald youngster James Mackrel leads the Championship by 1 point on his KTM from Dubliner Jordan Keogh on his Kawasaki, these two had a ding dong battle at Tandragee while Luke Smith & Glenn McCormick were absent. Behind Meara and Smith, Donegal lad Aaron Gardiner will be hoping to leap frog them into third, and local man David Martin will be screaming his little Husqvarna two stroke hoping to catch Gardiner.

The Nutt Travel Semi Expert MX1 Class Josh McCorkell on his KTM leads Lurgan Man Mark Dynes on his Maralin Car Wash TWDynes KTM by 32 points with Kevin Donnelly 28 points behind in third, while fourth is Frazer Young a huge 39 points behind.

The Towergate Insurance Clubman MX1 Johnny Haywood seems to have the Championship all but one with a huge 74 point lead over Lurgan’s Barry Dummigan is second with a 33 point advantage over Joshua Rea with Peter Jones fourth, Darren Wilkinson fifth and Ryan Canning sixth.