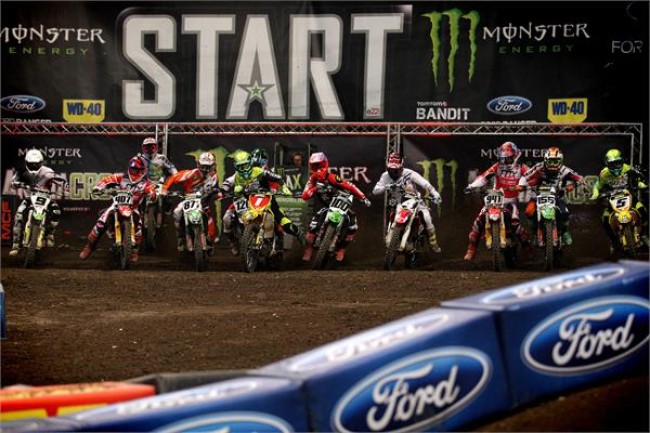 The 2016 Monster Energy Arenacross Tour powered by Ford Ranger, returns to Scotland this weekend for the first double-header of the new-look series.

Reigning and former Arenacross champions will again engage in a battle of the racing titans when the unique championship resumes at 7pm on Saturday the 9th, and then again at 3pm on Sunday the 10th of January 2016 at the SSE Hydro Arena, Glasgow.

The first round at Manchester last Saturday night saw current champ Thomas Ramette set out his stall with an overall Pro class win. He was given a run for his money by fellow countryman Cedric Soubeyras, who blitzed the opposition in the head-to-head two-lap dash, and Brit Jack Brunell who had a tremendous start to the 2016 Tour, taking third overall after a year out due to injury. The Pro riders will be all be going flat-out to rein in the Frenchmen, and spectators can expect sparks to fly as former Pro champs Fabien Izoird and Brit Adam Chatfield together with American hotshot Josh Hansen lock handlebars in racing battle.

Local lads 17-year-old Lewis and his 12-year-old brother Harris Campbell will be AX contenders for the first time at the Glasgow Arena. Contesting the Pro Lite and Supermini 85 classes and funded by their dad Stewart’s dairy farming business, they both see the experience as a challenge and experience they intend to enjoy. “We don’t have loads of money and sponsors behind us,” said Lewis, “so for us to be in the same racing paddock as the best Arenacross and supercross riders from across Europe, and beyond, is amazing.”

Away from the racing, the crammed Arenacross Tour programme will include radical Freestyle MX, where the giants of the FMX world will showcase their breath-taking skills some fifty foot above the track, with jumps spanning a seventy-five foot gap. Czech Petr Pilat will make his Scottish debut and the word is that he will pull out a few new tricks when the guys hit the ramps with their insane and frenzied freestyle free-for-all.

Commenting on the upcoming weekend of shows at Glasgow, event promoter Matt Bates of e22sports.com said; “Last year was our first time at the SSE Hydro and such was the popularity of the event that we decided to run two shows this weekend. We’re putting our faith in Glasgow and I know that from the moment the opening ceremony gets underway, spectators will be hooked.”