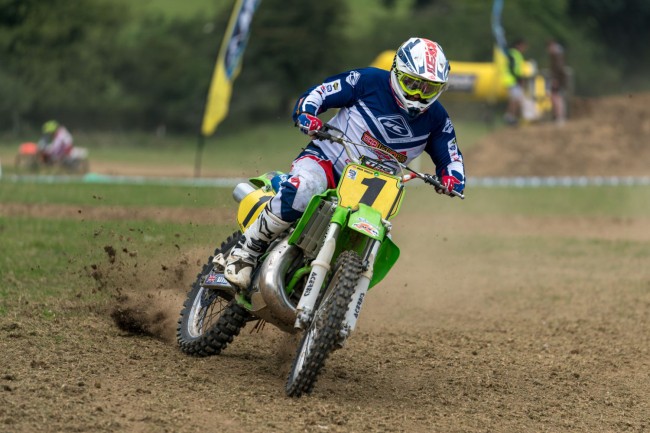 A former 500GP rider of the 1990s and a current-day Arenacross expert were just two of the standout riders in the first ever Apico 2-Stroke Festival at Sellindge in Kent at the weekend.

Brian Wheeler, the 48-year-old who has battled against such greats as Jean-Michel Bayle, Dave Thorpe, Rick Johnson and Eric Geboers in the past, showed he still has the skills and speed to master every sort of conditions. Riding a Kawasaki KX500 that he’ll use in next month’s Vets Nations at Farleigh, Wheeler was totally dominant in the Evo class, winning every moto.

A rain storm on the opening day turned the track – which was part old-school on grass and part new-school and built by GP track expert Justin Barclay – into a tricky test of man and machine. And Wheeler was even further ahead.

“When it gets slippery I just seem to be able to spot the best lines quicker than other riders do,” he said. “By the time they spot them, I’m gone!” Only John Waghorne, looking good on his Honda CR500, managed to get close in the opening moto on Sunday which was sun-kissed and dry.

Areancross ace Jack Brunell, swopping his usual indoor Kawasaki four-stroke for a Yamaha YZ125, was in incredible form in the 125 race for the fastest riders.

On the opening day, he ran away with both motos despite the race also having the 250 Faster class riders in it. The next day he fell on the opening lap of the first moto, and came through the pack to second place behind Chubbie Hammond, out on a borrowed TM. But despite a bad start in the final moto, Brunell came through to take the 125 win again to clinch the overall from Troy Beck and Preston Williams. Hammond, who had a race win and two runner-up spots, took eighth overall as he has a DNF in one moto.

The Open Faster group was won by Husky ace Connor Hughes, who took victory in the first of the four motos then had runner-up spots in the other three after a few slips and bad starts. Lots of the top men had some good results but some DNFs, ruining their overall score.

Mitchell Lewis, winner of both races on Sunday, had his overall ruined by a DNF on Saturday. He slipped off in the mud while leading, and his front brake locked on which took him down again.

The event, the brainchild of former British two-stroke champ Dave Willet, was all about bringing the fun back to racing and was geared for club-level riders. With more than 150 entrants, it’s the biggest two-stroke only race meeting since 2010, proving there is a boom in grass roots riders on the more affordable two-strokes. And with £1600 of prize money up for grabs across all classes, the action was fast and furious.

The clubman-friendly Open and 125 classes were packed, with close racing through the field. In the Open class, Jason Wells outclassed the field and won three of the four motos, with only a crash in one race ruining his perfect scorecard. He beat Darren Hansford and Sam Lewis to the overall, with Husky rider Joe Reeves in fourth despite two second place finishes on Sunday.

A perfect Sunday saw Ben Reeves win both 125 motos which helped him edge out Connor Sutherland for the overall win. Sutherland, winner of the first race of the weekend, tailed Reeves over the line in both races on Sunday. Third was Michael Chesney who took a single race win.

There was lots of fun on older bikes too. The SuperEvo class was dominated by Daryl Hall from Ryan George, out on a borrowed Honda CR500, with Tom Bird third. And in the two-stroke class, nobody could get close to Husky rider Jason Buffery who gave many newer bikes a run for their money.

And father-and-son team of Reece and Nick Hardy rounded up the podium, with youngster Reece beating his dad Nick to second place.