Two sand kings – only one winner! 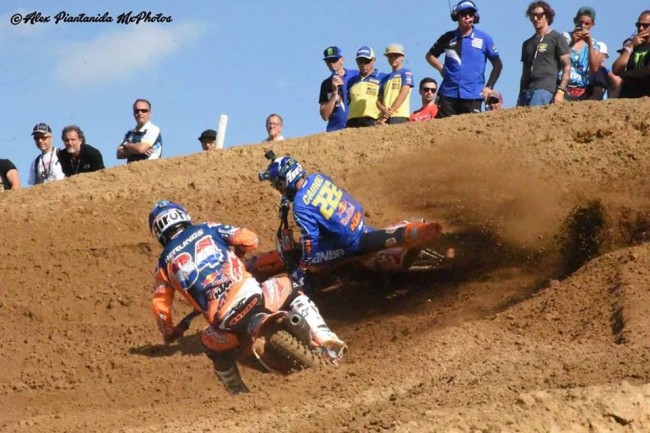 So, who’s the best sand rider in the world? We might just be about to find out this weekend during the MXGP of Lommel.

When Jeffrey Herlings was competing in the MX2 World Championship at sand races you just wouldn’t bet against him as he’s incredible in the stuff.

Remember a young 15 year old Jeffrey Herlings burst onto the Grand Prix scene in 2010? He simply took the world by storm at Valkenswaard that year winning his first MX2 GP round. Beating the likes of Ken Roczen, Steven Frossard, Jeremy Van Horebeek and Marvin Musquin to name just a few in what was a stacked Grand Prix field.

Another remarkable ride for the Dutch sensation was in Leirop when the then 17 year old lapped everyone except for Jeremy Van Horebeek in the first moto. He won by a remarkable two minutes and seven seconds.  In the second moto he ‘only’ managed to lap up to fourth but still won by over two minutes. Stefan Everts who was then his boss at KTM stated Herlings was the best sand rider in the world, “He’s an animal in the sand. He is the fastest rider on sand on the planet!”

However, fast forward to 2017 in what is his rookie year in the MXGP World Championship. Things didn’t get off to a great start as he came into the season with a wrist injury. It’s hard to believe he has only won one MXGP overall so far this year.

Antonio Cairoli on the other hand, after a few difficult seasons due to injuries is perhaps riding the best he has in his career and he is more than ready to take on Herlings this weekend.

Cairoli is one of the smartest riders to ever ride a motocross bike. Unlike Herlings he was never worried about how far ahead he could win by and because of that we have rarely saw him ride at 100% for thirty minutes plus two laps but we are starting to see more of it this year!

Lommel couldn’t be coming at a better time, the pair went head to head in Ottobiano earlier this year in the gruelling temperate.  In Herlings head he only lost the overall because he struggled with the heat but Cairoli on the other hand thinks he’s the main man after an impressive victory.

This won’t be the first time they both race each other at Lommel though. During the 2012 Motocross Des Nations they went at it in the Open and MXGP moto. Herlings was involved in a first corner crash but put on a remarkable charge and caught Cairoli from dead last. The clever Italian then raised his game and Herlings couldn’t make a move.

This weekend at the brutal sand of Lommel, a track both riders know well and love. Both of them will be riding with everything on the line as they’ll want to prove they’re the best sand rider in the world.

Let’s just hope it’s not won and lost in the start and we get to see the pair go head-to-head.

In terms of who could mount another challenge, look out for Arminas Jasikonis as he was very impressive in Ottobiano earlier in the year. Max Anstie could also be one to look out for outside the regular front runners.