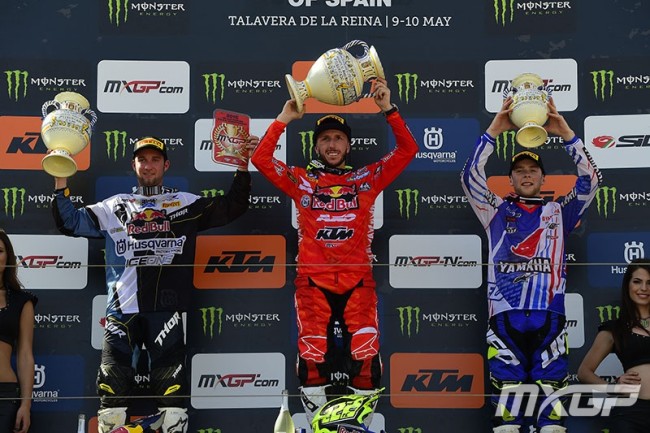 Two men will go into the 2016 MXGP season thinking they are the best rider in the world and the true world champion.

Febvre was the surprise winner last year but no-one can say he didn’t deserve it, he had beaten all the contenders who got injured at one stage or the other before the injuries and once he won his first moto was unstoppable, but Cairoli will believe he is the rightful champion.

The legendary Italian hadn’t lost a big bike title in his career until last year and will no doubt believe he is still the man to beat. His brief comeback at Glen Helen last year, where he led the race and had the fastest lap, showed everyone and especially Febvre that the Italian, despite being 30 now, still has the speed to win.

Cairoli has always said no-one has seen him at his very best yet, he says he doesn’t ride 100% at a GP but you get the feeling that this year might be the year he has to. Cairoli knows this is a huge year, was last season an unfortunate blip or is this the end of the Italian’s world title winning seasons as the young riders come through?

Cairoli has signed an extension to his deal with KTM until 2018, if he wins the title for the mext three years he will go down in history as the greatest rider of all time besting Everts ten world title with his eleven. It’s a tall order but Cairoli is clearly motivated by Everts’ record. He wants to show the world and Febvre that he is still the man to beat at the pinnacle of outdoor motocross.

But Febvre knows this, he knows what Cairoli has planned for 2016 and he knows some people will say he only won because of injuries. Febvre himself has said he will be even faster this year and his sand riding, going by the first round of the Italian championship, seems to have went up a notch. He is ready to show everyone he is the new king of MXGP and he is here to stay.

Both riders have the potential to take the speed to another level this year but who could stay with them?

Clement Desalle was looking awesome before his broken wrist and while he will try and race in Qatar he will lose points to his rivals but Desalle when fully fit could be Cairoli and Febvre’s toughest competitor.

Max Nagl was flying last year until his injury and if he gets the ball rolling early again cannot be counted out, he loves the bike and just has to stay healthy.

Gautier Paulin is the biggest question mark going into round one. He finished second last year but wasn’t as fast as he ws the season before. Will training with Aldon Baker help Paulin rediscover his speed? It hard to know as GP racing is very different form AMA racing that Aldon is used to training riders for. In my opinion Paulin is training there to boost his mental confidence more than anything. He had the speed and fitness before but if he believes it works, it might just get him back to winning races on a regular basis.

Then you have the two Suzuki’s of Strijbos and Townley plus Van Horebeek and Honda’s Bobryhev and MX2 world champion Tim Gajser. All can win races and run consistently at the front if they get the start as could the soon to returning from injury Jordi Tixier on the Kawasaki.

It could be one heck of a season if the riders can stay healthy but the rivalry between Febvre and Cairoli could well be the highlight of the year as they try and prove to each other that they are the alpha male of the class.