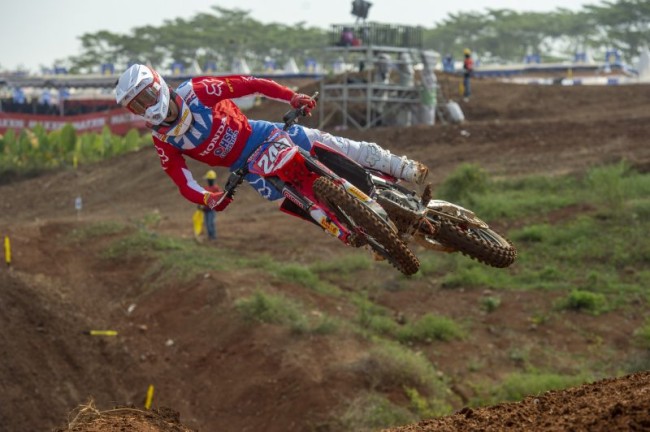 As the sun was setting at this Semarang circuit, Tim Gajser crossed the line in third position to cap another solid Saturday performance for the Team HRC rider. With a large Honda following in this capital city of Central Java, Indonesia, Gajser delighted those fans by getting out the gate in second position. However with a mixed track surface of deep ruts and slippery landings causing problems for a lot of riders, he took the decision to safely finish in third place and save himself for tomorrow’s motos. Brian Bogers also kept things smooth and steady in the qualification race to place 11th, which should be still good enough for him to try and make it two top 10 overalls in a row tomorrow when the gate drops.

With the hot temperatures making track maintenance extremely tricky, Gajser had a crash in timed practice as he was three quarters of the way to getting another pole position spot for the qualification race. Tweaking his ankle slightly, he instead had to settle for second gate pick and put his mind onto getting a good result in tomorrow’s motos where he’ll be looking to extend his GP winning streak to seven in a row.

Unlike most weeks when the Team HRC riders are able to practice between races, this week saw them stay in Indonesia away from the track. This meant that Bogers wasn’t able to get up to speed right away, especially with the testing track conditions posing real problems. Timed practice went a bit better as the Honda CRF450RW rider posted an 11th place time, but that gate pick wasn’t good enough to see him challenge those in front and instead he rode for the duration of the qualification race in 11th place. He’ll be hoping that tomorrow he can get out of the gate better and once again break into the top 10 overall, like he managed in Palembang last weekend.

With another hot day forecast tomorrow, both riders are hoping that the track crew can improve the racing surface, which should then allow them to ride a bit more freely when the MXGP gate drops at 13:15 and 16:10 on Sunday 14th July.

Tim Gajser 243
I was feeling okay in free and timed practice. I just made a mistake in the last section of the last lap when I was going for a fast lap and I tweaked my ankle a bit. We worked on it during the break, to make it good for the qualification race and overall I’m happy with my third place finish. Tomorrow it’s going to be two long races and I need to get two good starts because the track is quite sketchy, it’s really slippery in places. I just need to make sure I ride smart.

Brian Bogers 189
It was quite a difficult day because it wasn’t an easy track and I had ridden all week after spending the week here in Indonesia. That meant the first free practice, I took as a real warm-up session just to get the feeling back. My timed practice wasn’t the best though as the gap to the top five was too big so I wasn’t happy with that and I know I needed to be faster. This meant that I didn’t have the best start in the qualification race and 11th is pretty much where I stayed the entire race. The track is sketchy so I didn’t want to push and instead save it for tomorrow which I am looking forward to.

Marcus Pereira de Freitas
HRC General Manager – MXGP
It was a bit of a test today for the team with this qualification race. Neither Tim nor Brian had ridden in the week and it seemed like they missed it. Tim rode well but the track was very slippery in places because of the water they put on it and it is better to keep things safe, rather than push unnecessarily in the qualification race. Third place gate pick still gives him a good chance to get a holeshot and he proved in the last two rounds that his is capable of doing it on his CRF450RW so we are still hopeful of some good results tomorrow. We also feel that Brian can do a bit better after his riding today, and that with a good warm-up session tomorrow morning, he’ll be ready for when the gate drops in the two motos.