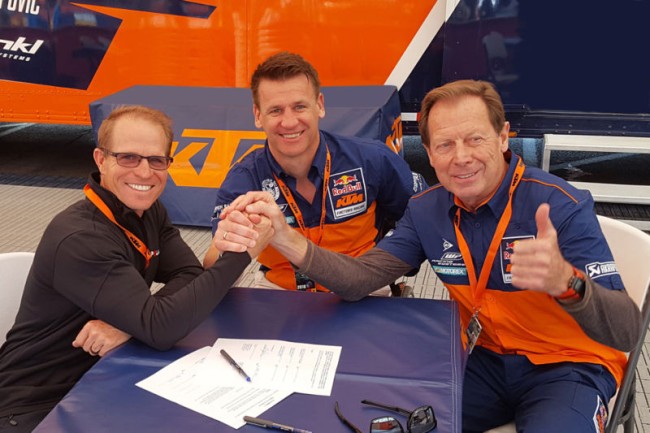 It is unusual to find much being shared in the secretive, self-absorbed and almost paranoid world of MotoGP. Sure there will be respect, solidarity, gossip and even friendship but the stakes are high for contracts and opportunities. There is also the knowledge that a steady stream of talent is waiting to sweep the carpet away at a moment’s notice. Everything feels slightly more cutthroat. It’s not hard to deduce this undercurrent through the distance between teams, the talk by managers and agents and the comments both on the record and off the record by the riders themselves.

In MXGP there is a similar (as you’d expect in any competitive environment) but softer element of this wariness. Perhaps it is the humbler roots of the sports and comparative lack of riches and ego (although Red Bull KTM’s Jeffrey Herlings remains one of the highest paid athletes on the roster) or maybe it is a greater degree of empathy among the riders: they have mainly grown-up through the sport together, have suffered injury demons and then see each other through numerous training motos and non-world championship races. There could even be a weak parallel drawn to the F1 drivers of the sixties who – according to many accounts of the time – were a tight bunch; welded by the ever-present and frequent threat of death and a busy calendar that saw F1 shared with F2, Endurance and sports car racing.

It was interesting to hear former Grand Prix rider Tallon Vohland talking on Zach Osborne’s Shifting Gears Podcast a couple of weeks ago. The American commented on the camaraderieof the world championship paddock compared to U.S. racing where there is more edginess between the riders. From my minimal experience working at select Supercross events in the last fifteen years it was possible to detect some of that, but it was an atmosphere born from the competitiveness and scenes around some big names and personalities like Carmichael, Stewart, Reed, Villopoto as much as from the sheer frenzy of the scheduling that ensured everyone was always spread out and busy.

So, near the middle of the decade when famed trainer Aldon Baker began to draw his clients together for a regime in one area (Florida) and eventually one facility it was seen as an adventurous and potentially risky ploy. Can you really throw a bunch of Alpha males into the same pit? The answer was emphatic with a slew of titles. The idea that rivals pacing themselves through their mid-week work together which then fed into the races on Saturdays and Sundays produced a new level of intensity and it quickly became a model adopted by other brands and teams. The Baker’s Factory has been the subject of various reports around the world as people try to understand and tap into this notion that competitors can be congenial and productive outside of a racing environment and still be poised to draw blood once the gate drops.

Riders training together is nothing new, particularly teammates, but the close proximity of ‘genuine threats’ was uncommon. Musquin, Dungey, Anderson, Osborne, Tickle and Webb together seemed like an unrealistic mix. But it worked.

In MotoGP the idea seems incomprehensible. Somebody like Cal Crutchlow will befriend and knock-around with Jack Miller. Marc Marquez will spend a lot of time riding and working with his brother Alex and there is a small group in Andorra that regularly cross paths but there is little collaboration (when I interviewed Maverick Viñales in Andorra two years ago we inadvertently bumped into Alex Rins and Jorge Lorenzo in the same little gym).

As keen readers of the last issue may have seen Mission Winnow Ducati’s Andrea Dovizioso is an avid motocrosser. He has an almost obsessive zeal to learn and know about how the craft and the preparation. From my experience talking to riders from both disciplines over the years it’s clear that they classify motocross as more technical, more expressive and permits more freedom as a motorcyclist compared to road racing. So it’s not hard to imagine why Dovi has a fascination with MX (indeed a healthy majority of the MotoGP grid quietly harbour the same interest) and the lessons that might be gleaned from pushing technique, concentration and machinery to ridiculous lengths. He will have watched the amazing influence of the Baker’s Factory alumni with curiosity.

When Danilo Petrucci, another MX fan and convert, finally joined the Ducati team last winter Dovizioso saw a possibility. He has raced in red for seven years and arguably never had a teammate in the same common space. In 2012 he signed for Tech3 and forged a bond with Crutchlow but the chance to cooperate was minimal. Since then Nicky Hayden (problems with injury), Andrea Iannone (personality), Jorge Lorenzo (another Alpha) did not present viable prospects. With the enthusiastic, down to earth and likeminded Petrucci there was a chance for Dovizioso to try a fresh training approach that might just help him find the extra mileage to be able to compete with Marc Marquez; his nemesis for the last two seasons for the MotoGP crown. Dovizioso and Petrucci ride off-road together, analyse and confide in each other for a complicated and confidence-testing ‘day job’ where track time on race machinery is so little and so precious. Even in Free Practice the Ducatis will exit pitlane together and start working through a set-up process.

It could be argued that Dovizioso does (or did) not see Petrucci as a championship contender. So he could be adopted almost like a protégé. While Marquez is arguably riding better than ever in MotoGP, Petrucci is the one who has profited most from the set-up: three podiums in a row and his first victory at the time of writing means he is closer than ever to the top of the standings while Dovizioso has to recover from the unlucky and blameless DNF in Barcelona.

“I think Danilo improved this season because he believed more in himself and he understood his potential; in the past he didn’t really believe in that and really didn’t analyze and realize his good points,” Andrea said after his training-mate’s fantastic success at Mugello.

“To train together, yes, it is like Aldon Baker in a different way,” he added. “Unfortunately in our sport we can’t train on the MotoGP [bike]. We have to find something different. But every time we’re going [to do] flat track or motocross we push each other. This puts us on the limit. We take the risk, but it’s a part of our sport. I think it works because fortunately both we came from motocross, so we have this similar base. So in motocross we are quite fast. Flat track we are similar. So every time we try to beat each other and this is good. Yes, the consequence is the risk but I think can help both because he’s really talented. I think it’s really positive.”

Petrucci might say that he and Dovizioso are “going for different things” (and Dovizioso, 33 compared to Petrucci’s 28, boasts ten more years of Grand Prix and 87 trophies) but the results would currently indicate otherwise. Dovizioso is still asking for more of the Desmosedici and Ducati and is facing Marquez at his most formidable. The Catalan himselfhas the benefit of a fast younger family member who is not on the same level (Dovizioso resignedly admits that Petrucci is the quicker motocross at the moment) but is still an effective pacer. Marquez famously has little issue with riding and even racing motocross with other people but he keeps a level of superiority when it comes to status.

“When you train alone it’s not the same so if you train with somebody,” he says. “Also I go training because it’s my fun time. It’s not training; it’s my hobby. [It’s] Not only me and my brother. We have always three or four friends around us. One is Jose [Luis Martinez, former MX Spanish Champion].”

“We always find a very good level,” he insists. “We ride always like they did, like Valentino at the ranch. It’s the way to improve. Of course [there is the] risk you can injure [sic] but is the life.”

Valentino Rossi, the biggest dog of all, is another who has looked around for ‘the group effect’ and immersed himself in youthful energy of the VR46 Academy to elongate his own passion for racing and to sharpen his racecraft. Now that two of his brood are competing in the MotoGP class as well, the dynamic of the Academy could be shifting and Rossi must be hearing the ticking clock more than ever as the structure pushes more towards a Baker’s Factory equilibrium. Still, that the Italian is still so fast at 40 is testament to the power of the pack.