Townley, Strijbos and Seewer talk about their German GP 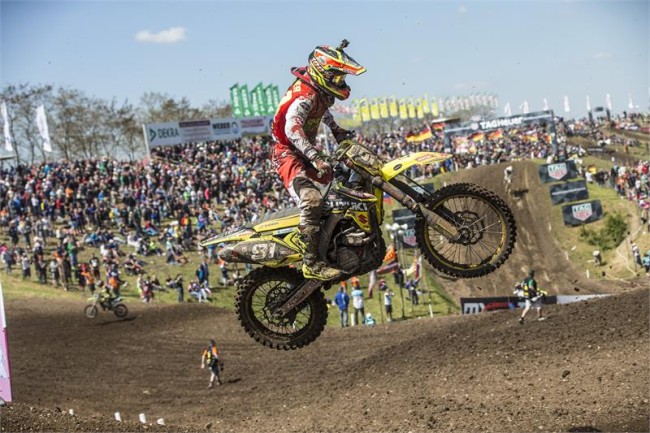 Ben Townley and Kevin Strijbos posted top-seven positions at the Talkessel circuit in Teutschenthal for the Grand Prix of Germany and round seven of the 2016 FIM Motocross World Championship on another weekend of progress and perseverance for Team Suzuki World MXGP on another technical and demanding course.

Sunshine and a strong breeze graced raceday at Teutschenthal and where a large crowd sought a vantage point around the banked spectator zones, creating a ‘pit’ of noise as the narrow and largely off-cambered layout snaked around the facility. Freshly watered hard-pack, deep ruts and later dust in the second motos were just some of the conditions the Grand Prix riders had to face but the terrain offered a degree of line choice and variation.

Strijbos and Townley entered the start gate with eighth and 17th spots respectively after their efforts on Saturday. Strijbos had a decent first half of the opening moto and was closing on Christophe Charlier for fourth position until he lost some pace and could not tag along with the Frenchman; fifth place was still his joint-best classification of the season. Townley – as he would in the second moto also – weathered a mediocre start and set about gaining the ground and positions he could to arrive to seventh. The New Zealander coped with rocks and roost and repeated the ranking later in the day for his most consistent outing of the season so far. The second race was forgettable for Strijbos: The Belgian could not find an effective feeling or rhythm around the German soil at its most roughest and trickiest and crossed the finish line in 10th.

“Ben did two solid seven places but messed up qualification and his start place in the gate was not ideal,” commented team General Manager Stefan Everts. “Overall I’m happy that he finally finished two motos and I think he needs a few more races under his belt to get better and stronger and to get somewhere in the championship. He is impatient and wants results, so he is not happy! But it is a difficult time. With Kevin I think fourth place would have been possible in the first moto because he was catching Charlier but then he dropped back a bit. In the second moto he was just ‘off’. He couldn’t really give us an explanation. It was a pity.”

Strijbos is seventh in the world championship and one point in front of Shaun Simpson. Townley is starting to get his campaign rolling again after missing races in Argentina and Mexico and is 13th. Team Suzuki World MXGP will move south to Italy this week for the Grand Prix of Trentino and the annual visit to the compact, narrow and stony hard-pack of Arco di Trento.

“It is positive to keep strong for two motos without any major hiccups. My expectations and what is reality is not the same right now so I’m not happy. My mistake yesterday hurt me majorly for the starts. I had to fight for the top 10 from deep [in the pack] in the first laps and made multiple passes. I made hard work for myself and need to clean up my Saturdays to get in a better place for Sunday. The second moto was better and in the last two laps I thought I was going to get Max. It is not all fairy tales; it is a brutal sport!”

“The first moto was decent. I was happy with fifth but could not follow Charlier and that was a pity. The second moto was a struggle from start to finish; I had no confidence on the track and did not feel strong enough to push. I cannot say I am happy with 10th. Onto the next one.”

“It was a really good weekend for me overall and started with practice. I was feeling good today but made a mistake on the first lap of the first moto that cost me a lot of places. I was happy to manage to come back to fourth because it is not so easy to pass here. I made a good start in the second moto but then Pauls [Jonass] crashed in front of me, which cost me two spots. They had put quite a lot of water on the track so I had to be careful. I took the opportunity when I had it to get in the lead and defend it as well as possible. It is amazing to be up front; it is what we are working for.”

“Jeremy had a fantastic race and he made a very big step today and fought really hard for his place,” said General Manager Stefan Everts. “He had the lead for a couple of laps under pressure from Herlings which wasn’t easy and he fought so much; it was an important thing for him to do.”