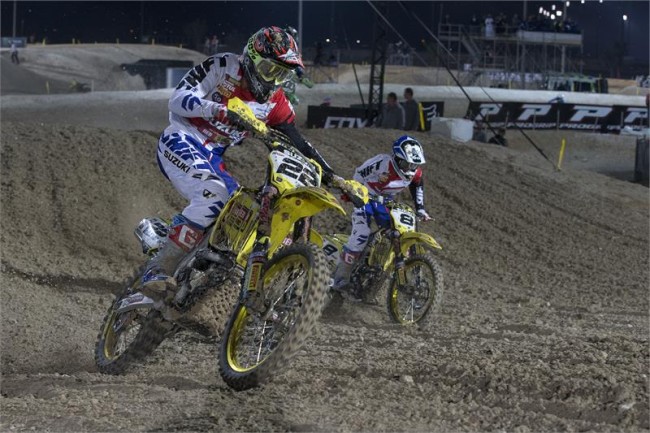 The Grand Prix of Qatar was a testing launch to the 2016 FIM Motocross World Championship for Team Suzuki World MXGP, but ultimately a positive learning experience, as the fast-and-wide layout at Losail was home to top-11 finishes by Kevin Strijbos and Ben Townley on the Factory RM-Z450s.

The illuminated and nocturnal setting of Losail opened MXGP for the fourth year in a row and with a jumpy and hard-packed terrain barely altered from the previous editions of this impressive and slick event, the surface mixed ruts, holes and deceptively-slippery areas with dirt that offered plenty of grip.

The motos on Saturday evening began under a cloudy dusk setting and some of the coolest temperatures of MXGP’s brief stay in the country. The Suzuki athletes had been revising and altering their set-ups to best tackle the terrain and made some wholesale changes. Strijbos couldn’t exit the gate among the leaders but the Belgian fought hard to get through to eighth position and for what would be the highest race ranking of the evening. Townley flinched too early and nudged the gate. Starting last, the New Zealander actually found his way through to the top-10 on the first lap and crossed the line in 11th.

It was Strijbos’ turn to suffer a poor getaway in the second moto and the former championship runner-up was dismayed not to make better progress through the rankings. He ended the 30 minute and two-lap distance with ninth. Townley was again 11th after having to use his spare bike in the wake of a mechanical problem suffered on the sighting lap.

“It was a very tough start,” said General Manager Stefan Everts. “We’d had a great winter and thought we would be better prepared. It was hard racing today and both Ben and Kevin struggled all weekend to adapt to the track. We worked on setting-up the bike in a different way, which normally is not the ideal thing to do. We still need to find their ideal set-up and it will take a bit of time. We learned and saw a lot here that will help us. The new FIM rule for the second bike helped us in the second moto! So, it was a hard start, but we keep on smiling and keep on working. We will keep the spirit up and it will be a new weekend in Thailand.”

“It was a bad weekend. We all struggled and it looks like we are not ready yet. There is not much more I can say! My times were ‘off’ yesterday and today and I tried to push and thought I was riding good, but it was nothing. I had a bad start in the first moto but I tried my best and we got an eighth. It was not good but there were signs of progress. I wheelied at the start of the second moto and it was one big mess. There was no energy in me to do what I needed to do. We have worked hard for this GP so it is a bit of a mystery. We just have to hope for better next weekend.”

“I went with the guy next to me and hit the gate: Stupid. I haven’t done that in years. The bright points were that we made a change overnight with the bike and then again between warm-up and the first moto and the guys nailed it. It was pretty good and we made progress. I felt like I had a lot of cobwebs and rust in the system and it was a really tough track for me to have my first race. It was so tricky and I think ‘treacherous’ would be a good word for it; there were literally potholes on the track. There are a lot of positives to take out of the first moto because I went from 21st to 10th on the first lap and I was able to ride with guys who were championship contenders. The second moto was just a cock-up. I went for the sighting lap and we had a ‘mechanical’. I had to use the back-up bike and it was a huge lesson for us as a whole team. Stefan said that in 18 years of racing he never had to use the back-up machine. So we learnt a lot.”

“A really good feeling actually because yesterday I was sitting in my chair without any motivation. My body was quite weak and I was bunged-up. I rode quite well to fourth and then luckily felt much better today. I made a really good first moto and could lead some laps but needed to save some energy to make it through the whole day. The second moto was a similar story: I was pushing for third until a small mistake, came back to fourth and then decided to take a risk and go for the podium. I preferred to try instead of ‘following’… but another mistake came! Overall I’m happy with fourth. My speed is there and the speed from the bike is really good.”

Team Suzuki World MXGP now travels to Suphan Buri in Thailand for round two of the FIM World MXGP Championship next weekend.