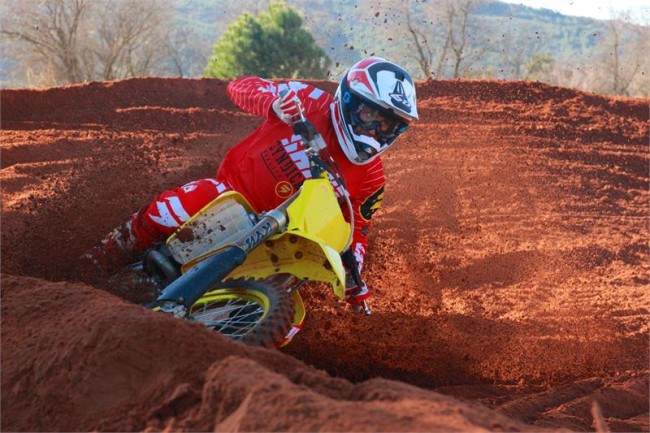 New Suzuki World MXGP rider Ben Townley arrived in Europe and immediately joined the team to test his new RM-Z450 and get into training for the 2016 World MXGP Championship this week.

The former MX2 World Champion flew into Belgium and then headed to Spain for testing with MXGP team-mate Kevin Strijbos and MX2 rider Bas Vaessen to up the training programme he was undergoing in his native New Zealand.

The 30-year-old, testing at the team partner facility, Red Sand MX Park, said: “It’s my first time down here in Benicassim and I’m really liking it. The team has been training here for a week now and it’s great that I can join them. I like being able to ride with my team mates. I’ve known Kevin since my first year in Europe and we get along fine; and this is also a great chance to get to know the younger guys.”

The training session in Spain was also the first time that Townley worked together with Suzuki MXGP Team General Manager Stefan Everts. The 10-time MX World Champion has been at the track with the team and sharing his experience as much as possible.

“I’m looking forward to working with Stefan,” said Townley. “I’m curious as to what he has to say about my riding and how he thinks it is going. My speed still needs to come-up a little, so I’ve got a few areas to work on in the coming weeks. Still, it was tough leaving my family behind. I’m missing them a lot already.”

Everts was happy to have his second MXGP rider coming to Europe this early in the year.

He said: “I’m happy that he has made the trip already and now he has the time to acclimatise to the colder weather and the time difference. Ben is in great shape and ready to train with his team mates on the same rhythm.”

Townley is feeling confident and happy on the 2016 Suzuki RM-Z450. He added: “I really feel like this bike fits me so well and I have a lot of fun riding it. I’ve been able to test a few more things since I arrived and that has improved the bike even more for me.”

The MXGP season starts in Qatar on February 27th, but Townley will make his Suzuki debut at the Hawkstone Park International in the UK on February 7th.

Details on Red Sand MX Park can be found: http://www.redsandmxpark.es