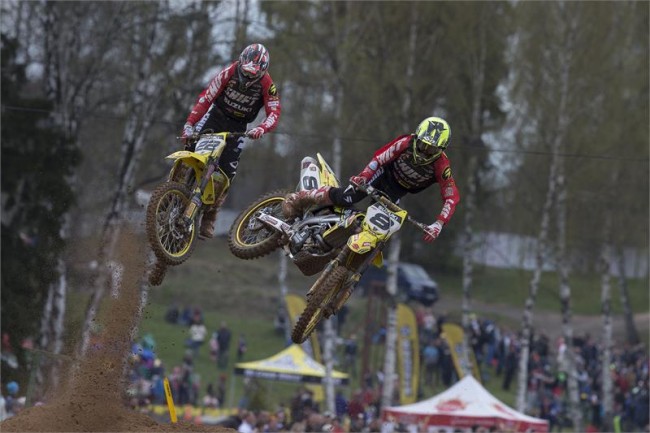 Ben Townley made a determined if somewhat dramatic comeback to MXGP action at Kegums for the Grand Prix of Latvia today.

A good enthusiastic crowd filled the shallow banks at the dry, loose and extremely bumpy circuit and the New Zealander, on his first visit to Kegums, rode to eighth overall on his works RM-Z450 as team-mate Kevin Strijbos was forced to retire from the second moto with a damaged clutch as a result of a collision between the athletes.

After requiring a quick medical check on a bashed left ring finger and knee due to his collision in the Saturday Qualification Heat, Townley was still able to enter the start gate with designs on the top-five of the MXGP pack and in his first appearance since recovering the from the virus that caused him to miss trips to Argentina and Mexico.

Bright skies threw generous light onto the orange Kegums soil and the surface churned into a plethora of punishing ruts and treacherous bumps that required elements of risk as much as a calculated approach. Townley rode positively in the first moto (despite touching the gate) to made good on a top-10 first lap slot and follow Strijbos across the line with both Suzukis going 6-7 in a steady initial sprint.

In the second moto the team-mates came together on the opening lap in a smash that saw Townley hit the ground and Strijbos sustain some damage (a holed clutch) that caused the bike to smoke. Strijbos – who was dealing with the effects of a painful back – was riding well and moved up to third place by passing Jeremy Van Horebeek until he lost power and stopped on the 12th lap of 17. The Belgian was forced out and returned to the paddock. Townley, who was almost last on the first lap, climbed all the way from last to 13th in what was a damage-limitation exercise.

“The guys just came together, one took an inside line and one an outside line and Ben crashed and Kevin had a hole in the clutch,” commented Suzuki World MXGP General Manager Stefan Everts. “It was a real shame because both were riding well this weekend and we had a decent build-up to the Grand Prix. We could see that Kevin’s bike had some trouble either through water or oil and Ben just had to fight back again. I know Kevin is disappointed and was capable of something really good this weekend and Ben is unhappy with what happened but also showed some good things.”

Strijbos is eighth in the MXGP standings while Townley reactivates his scorecard down in 15th after six rounds of 18. Team Suzuki World MXGP now moves onto the dips and drops of Teutschenthal for the Grand Prix of Germany next weekend.

“Not so much luck so far this year. The first moto was pretty good and I was catching Febvre until I made a couple of mistakes and then a really big one where I almost lost the bike and had to run off the track. Despite that I was still feeling good for the second and had a slightly better start. On the first lap I picked a rut on the outside and Ben came through and hit me. He crashed from that move and hit me really hard, I was worried about the engine but saw I still had power and carried on. I was feeling great and gaining positions and time but I also had to adjust the clutch quite a lot until eventually it just ran out. I had to stop and the guys saw a big hole through the clutch cover. My back was not too bad today and overall I feel like we are going in a good direction.”

“A bit of a shocker to be honest. I moved too early along with Clement [Desalle] in the first moto and just had to put my head down and see where I’d end up. On the first lap of the second race there was a lot of jostling going on. I went inside and I saw Kevin go wide but didn’t expect him to come back as quickly as he did. We touched and I went down and he obviously paid for it later. If it had happened on lap 15, say, then I’d understand people being upset but it was on the first and pretty chaotic. Just one of those racing things and it was a shame. After that I just did what I could. Stefan had told me that the track would get rough and demanding so I played it safe out there. There are some positive signs from this weekend and I really just need to put everything together in one Grand Prix to show what I can do and it hasn’t happened yet this year.”