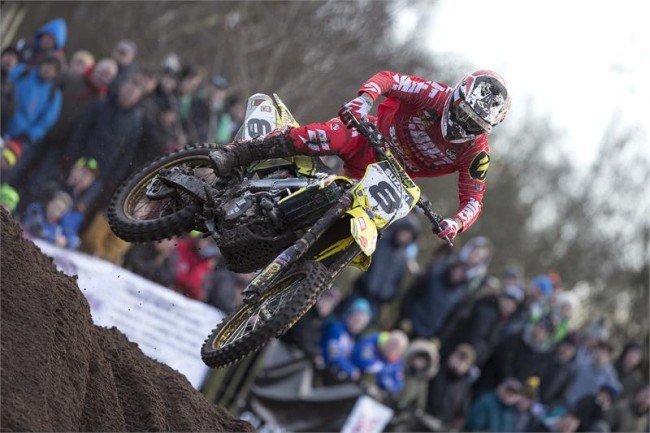 Team Suzuki World MXGP and MX2 kicked-off the 2016 season with strong podium results at the weekend’s Hawkstone International Motocross in the UK.

RM-Z450-mounted MXGP team riders Kevin Strijbos and Ben Townley were joined by MX2 riders Jeremy Seewer and Bas Vaessen aboard the RM-Z250 for the season-opening international at the former GP venue in Shropshire that saw a strong entry of international riders. It was also the first time that the teams raced under the leadership of new General Manager Stefan Everts.

Said Everts: “Under tough track conditions our riders and machines showed good potential. We had a real baptism of fire, but I’m happy about it. We made some progress and we know what we can work on for the next races. Overall it was a good weekend for the team.”

Strijbos had some difficulties feeling comfortable on his bike in the first two motos, but improved to claim a podium position in the Superfinal; a mix of the top MXGP and MX2 class riders. He said: “I didn’t feel as good on the bike compared to training over the past weeks, but we made changes for the Superfinal and I could finally show what my real potential is.

I felt like you could see the progression I have made. We now understand where we can improve, so it’s only up from here on,” added the Belgian who was fourth overall in the MX1 class with a fifth and fourth place; and third in the Superfinal.

For Townley, it was his first race after coming out of retirement at the end of 2015. He said: “I was super excited to be behind the start gate again and race. The track conditions, however, where hard and after the first race, I asked myself what I was doing in Europe again, coming away from the New Zealand summer! But then I got better: I had a good start in the second moto and could really feel why I had been working so hard over the winter and I was really happy passing Clement Desalle in the last lap.

“In the Superfinal, I had a bad start and I found it hard to pass the guys in front of me. Then Kevin passed me and I started to follow the leaders. It was really nice to ride behind them for a couple of laps. I even had the fastest lap of the race.”

Townley finished sixth in the first moto and second in the second moto, which gave him third place overall.

Everts was happy with the Kiwi’s day. He said: “He had a solid first day back in racing. I’m happy with the results and looking forward to the next races.”

Team Suzuki World MX2 riders Seewer and Vaessen also had a promising weekend: Seewer, who was fifth in the 2015 MX2 World Championship, raced for the first time at Hawkstone. “I’m pretty happy with how the weekend went. In the beginning I had to get used to the track and the conditions were really tough. I also had some problems with my goggles but my feeling on the bike was pretty good,” the Swiss said. “I had a good start in the second moto and could maintain my third position.”

Everts was also positive about Seewer’s riding: “There is still some work to be done but I saw some good things. It was a pity in the Superfinal,” commented Everts after Seewer got the holeshot but crashed shortly afterwards, finishing in seventh place.

Team youngster Vaessen (18) also had a pretty solid day. He said: “I’m very satisfied with how the day went. I had some trouble in the first moto by crashing in the start and having difficulties with my goggles, but overall my day was great. I have learned a lot and made progress.”

Added Everts: “Bas had a very strong day. He made good progress and was very consistent with his riding. Vaessen finished 11Th in the first moto and sixth in the second moto, plus he rode to a solid sixth place in the Superfinal.

Both teams are back in action their second international race next weekend at Valence, France.