Tough day for Barr and Irwin at Foxhill 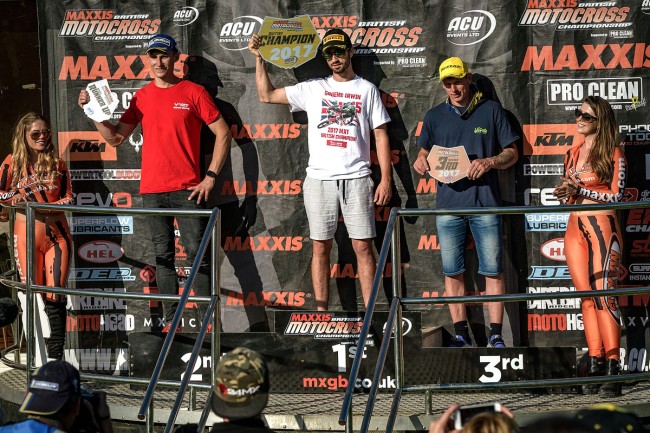 After a fantastic 2017 Maxxis ACU British Motocross Championship that’s seen Graeme Irwin win the MX1 title and Martin Barr finish second in MX2 the series ended on a low note for Buildbase Honda at the eighth and final round at Foxhill on Sunday.

Martin’s day finished prematurely with a huge crash in the opening MX2 moto while Graeme, who decided to ride both MX1 and MX2 classes at the spectacular Wiltshire circuit – scene of many epic British GPs in the 1990s, was forced to pull out after two races through illness.

The day started positively for the team with Martin posting the top time in qualifying in MX2 and Graeme, despite a week-long illness, matching his team-mate’s pole position in MX1 and also putting in the sixth fastest time in MX2.

Martin then pulled a huge holeshot on his CRF250R in the first MX2 moto. After leading for seven laps he was pushed back to second before crashing heavily on one of the dramatic downhills that Foxhill’s famous for.
The race was red-flagged while Martin received medical attention before being taken to hospital where, thankfully, it was discovered that his injuries were restricted to heavy bruising with no broken bones.

“That was probably the biggest crash I’ve ever had in all my years racing motocross,” said Martin, “so I’m happy to escape without breaking anything although I am pretty sore.

“A big thank you to everyone for all the messages and phone calls I’ve had asking how I am.”

Graeme, who was credited with seventh when the race was stopped, then had to go out on his CRF450R in the first MX1 moto but it was clear he wasn’t completely recovered from his illness.

Ending the first lap in fifth, he quickly pulled through to third which he bravely held for nine laps before fading back to fifth in the closing stages. The decision was then taken for him to withdraw from the rest of the day’s races.

“I’ve had the flu all week – on Monday and Tuesday I was in bed all day – so I went out on the bike on Friday morning but only did one session just to try to blow the cobwebs away,” said Graeme. “I knew how much effort the team had put in to build me a 250 and I didn’t want to let those guys down plus I thought by today I’d have the energy.

“In MX1 I qualified fastest but five laps into the first MX2 race I was done, I felt like I had nothing left in the tank.

“It was the exact same in the first MX1 race only this time it was after three laps. I felt horrendous and the heat certainly didn’t help. I feel like I’m one of the fittest guys in the class and I’ve had a great season so it’s a big disappointment not to be able to give it my best.

“The plan is to go home now to Northern Ireland, rest up and begin my preparations for the Motocross des Nations.”
Although clearly disappointed by the end to their Maxxis campaign team owner Dave Thorpe was remaining philosophical.

“Today’s obviously a big disappointment for the team,” he said. “We’ve had such an amazing season and when you come to the final round you want to sign off in style but that’s just racing.

“Graeme’s been poorly all week and I think a combination of that and the heat proved too much for him today so he’s going to take a week off and then we’ll get back to work and try and get ready for the des Nations.

“Martin’s crash was bad but the good news from the hospital is that nothing’s broken which is a big relief. I know he’s beat up – this is not a track you want to crash at. He was riding great at the time and went down hard.”

Both riders now have five weeks to prepare for the Motocross des Nations at Matterley Basin near Winchester where they’ll represent the Irish national team.