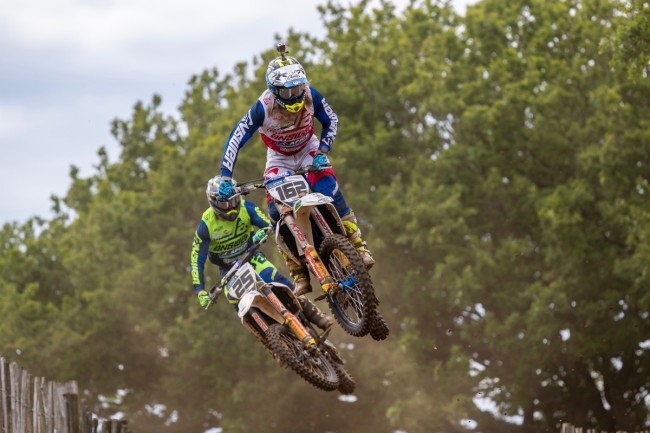 Blaxhall in Suffolk marked the fourth round of the Maxxis ACU British Motocross Championship at the fantastically prepped venue. The team travelled to the sandy circuit with just Jamie Law and Stuart Edmonds, while Matt Burrows continues to recover from his broken ankle.

The morning started with qualifying which saw both riders finish inside the top 20 with Edmonds in 15th and Law 18th fastest.

Going into the opening race both riders were hoping for a good start, unfortunately there was a big crash on the first corner and the race was Red Flagged to allow for the Medical team to treat the injured rider.

Following a long delay the racing resumed and in the second start Edmonds started in 13th with Law a few places behind. The pair both pushed forward early in the race but then suffered from technical problems which damaged their chances of a good result. For Edmonds a clutch problem resulted in him dropping to 15th at the finish while Law was stuck in 1st gear from the third lap onwards and crossed the line in 13th.

The second moto saw them both riders suffer bad starts as a result for bike issues, Edmonds continued to suffer from a clutch problem, while Law’s machine wouldn’t fire prior to the start and missed the gate drop. After the bad luck both riders pushed hard with Law finishing 14th and Edmonds is 18th.

Overall on the day Jamie Law finished 14th with Stuart Edmonds claiming 19th. Both riders will now be hoping for better results as the championship moves into the second half.

Dylan Brown – Team Manager – Mixed bag of emotions for the team this weekend as both riders had issues with bikes, Jamie broke a gear selector and had to ride in 1st gear the whole race and then the bike wouldn’t start for the second race so missed the gate drop starting from last position, whilst Stu had clutch issues all weekend so neither rider made things easy for themselves. The weekend was tough for the entire paddock after a terrible first turn incident involving several riders, We would like to wish Ryan Houghton a speedy recovery.

Jamie Law – It was one of those days, Mechanical issues in both races but that’s racing. I live to fight another day. The effort that goes in from my team and good people around me will be rewarded soon. In Race 1 I was stuck in 1st gear from lap 3 then in Race 2 the starter broke on the way to the line so when the gate dropped I was trying to bump start the bike through the trade area. Onto Desertmartin.

Stuart Edmonds – Today was tough for me with clutch malfunctions in both races, I felt my speed was there but the issue with the clutch hampered any decent result and really made me struggle with aggression, but I made the most of it and never gave up and made sure I salvaged every point possible. Race 2 was tough having to leave the line last but I am home in one piece. I’ll be working hard to redeem myself at Desertmartin! It’s only a small speed bump, I always bounce back better. Thanks to the team and all the people back home that believe in me, I’ll get there I promise!