Tonus, Seewer and Paulin on their German GP 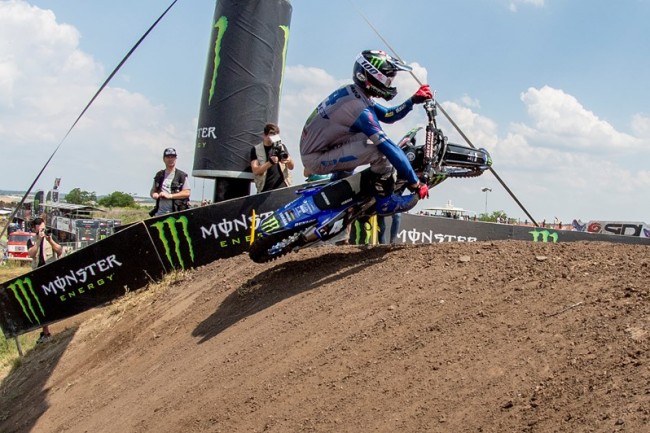 A historic day at the tenth round of the MXGP World Championship in Teutschenthal, Germany, saw the Monster Energy Wilvo Yamaha MXGP team celebrate nine podium finishes with both riders, Arnaud Tonus and Gautier Paulin, uncorking bottles of champagne atop the MXGP podium. It is the fourth time this season that YZ450F riders have made up two thirds of the premier class podium, and the duo are now tied on points for fourth in the Championship Standings, 1-point shy of Monster Energy Yamaha Factory MXGP’s Jeremy Seewer, who remains third after missing the podium by 1-point today.

An explosive start to the opening MXGP race saw all four Yamaha YZ450F riders force their way into the top-7. Paulin had the initial advantage but was quickly passed by Seewer and Tonus as Monster Energy Yamaha Factory MXGP’s Romain Febvre railed around the outside of five riders on his way to sixth, from tenth position.

Up front, Seewer chased the Championship Leader Tim Gajser as Tonus, Paulin & Febvre engaged in an epic three-way battle for fourth. On lap four, Febvre switched up most of his lines in search a way past his French compatriot Paulin. .

Seewer managed to retain second position despite a small fall when he ran into the back of Gajser. Unfortunately, he lost some time in the incident which allowed Julien Lieber to make a pass with 11-minutes left on the clock.

On Lap-9, Febvre out-dragged Paulin down a rutted straight for a place inside the top-five, while Tonus dramatically picked up the pace after Lieber crashed and made second position available.

The number ‘4’ reeled in his smooth riding Swiss compatriot and was able to capitalize on an error on the final lap to finish as the runner-up. Seewer, Febvre and Paulin rounded out the top-five in that order.

A frantic start to the second and final race saw Febvre crash at speed on the start straight while his teammate Seewer looped out at turn-two.

Tonus was quick to move into third position after a top-five start where he remained unchallenged for the entire 30-minute plus 2-lap duration of the race, while his teammate chased him around turn-one and had to dig deep to steal fourth position from Max Anstie on the final lap.

Seewer and Febvre were impressively resurgent. The ’91’ wasted little time clawing back a place inside the top-ten, and was able to finish a hard fought eighth, while Febvre put in an awe-inspiring charge from last position to finish 12th.

The next round of the MXGP World Championship will take place in Palembang, Indonesia, on the weekend of July 7th.

“This weekend was a bit more challenging because I had a tough qualifying race yesterday, so I was pretty far out on the start and I had to dig deep going into the first corner, but I managed to be inside the top-five in both races. I had a good battle with the Yamaha riders in the first race, but I managed to pass Jeremy on the last lap when he made a mistake, and then I had another good race in Race 2 and was able to finish on the box for a fifth time. It was also amazing to have Gautier up on the podium with me. We have a great atmosphere inside the team, and this is a very special moment for us and the team. I am super happy for him.”

“I can’t thank the Monster Energy Wilvo Yamaha MXGP Team enough. For the past few weeks it has been tough for me, I have been off the podium. I had a big crash in Portugal and then was unlucky in France and then met the ground again in Russia. Last weekend in Latvia, I felt more like myself, but I didn’t reach the points I wanted to, but the feeling was there and it was a good training. It was tough, I had to fight hard for this one, but I know and have known my entire career that nothing comes for free, so I fought and now I am here and it feels great.”

“I had a really really good weekend. Now I am starting to pick up the flow right from the Time Practice. I missed the podium by 1-point even with a crash in Race 2, but I felt good all weekend. I was up there in the top-five and top-three all weekend. I fell in Race 2 and I fought really hard to come back through the pack really quick which takes a lot of energy especially on a tough track like this. I am happy with everything; I took good points which is the goal at the end of the day. I just want to keep collecting points and moving forward.”