Tonus on a superb podium in Portugal – it feels amazing! 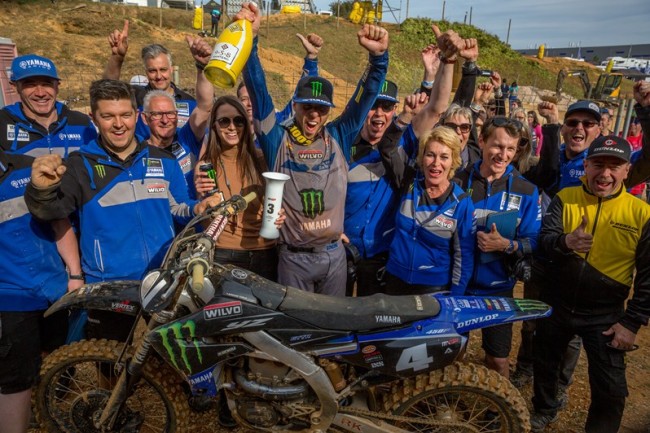 Monster Energy Wilvo Yamaha MXGP’s Arnaud Tonus ended a two-year podium draught as he celebrated the sixth round of the MXGP World Championship in Agueda, Portugal, from the third step of the podium, while teammate Gautier Paulin retained third-position in the MXGP Championship Classification after he salvaged tenth overall. Monster Energy Yamaha Factory MXGP’s Jeremy Seewer finished inside the top-five for the first time in his premier-class career. He was fifth overall, 2-points clear of his teammate Romain Febvre, who made an eager return to racing with an eighth overall result.

The circuit of Agueda time-warped the riders back to the grass-roots style of racing. The distinctive red soil was left in its natural state rather than ripped deep by machines, which made for a hard and slick surface. Reveling the unique conditions, Tonus and Seewer went bar-to-bar in the first Grand Prix race of the weekend as they rubbed plastic on more than a few occasions while battling for third position.

With 13 minutes left on the clock, Tonus found his groove and set the fastest lap of the race, which gave him the edge he needed to inch away from Seewer.

Tonus maintained his speed to the flag and finished third, while Seewer held off a tough challenge from Julien Lieber for fourth.

After a 10-week hiatus forced through injury, Romain Febvre made a heroic return to racing. The Frenchman got off to a sluggish start in race one, but as one of the most technically gifted riders on the gate, his throttle control and ability to power slide his YZ450FM around the Portuguese circuit worked in his favor. Despite missing ‘race fitness’ and suffering from arm-pump, the 26-year old was able to push through the pain barrier for a hard fought ninth place.

Suffering the effects of a heavy fall in the Timed Practice session on Saturday, Paulin was stiff and miss-read the track surface while pushing for sixth position on lap-1. He fell spectacularly.

On a track that is high speed with limited line selection, passing was difficult. The Frenchman remounted his YZ450F and did his best to bounce back from the nasty crash. He managed to put in a spirited performance for 15th position.

In the final race of the Grand Prix, the power of Yamaha’s popular YZ450F was on full display as all four riders exited turn-one inside the top-seven. Evenly matched, the four Yamaha stars fought for a place inside the top-four with Tonus leading the way closely followed by Seewer, Paulin and Febvre.

The action-packed race saw Tonus break free from the trio that chased him after he capitalized on a mistake by the championship leader, Cairoli, with 10-minutes left on the clock.

As Tonus challenged and claimed second position from Clement Desalle before relenting to a hard-charging Cairoli with 4-Laps remaining, the thrilling battle between Seewer and Paulin for fifth raged on until the final lap when Seewer fell through the wave section.

Tonus finished third and was able to uncork a bottle of champagne on the third step of the podium for the first time since the MXGP of Trentino in Italy, April 2017.

Paulin inherited fifth position and Febvre sixth, while Seewer recovered as quick as he could to finish the race in tenth.

Paulin remains third in the MXGP Championship Classification, while Seewer is sixth, only 13-points shy of a place inside the top-five. Tonus’ performance allowed his team to toast a fourth podium success this season. The Swiss rider has moved up into ninth in the championship chase.

After missing four rounds due to injury, Febvre is 19th in the Championship Standings.

The next round of the FIM Motocross World Championship will take place in five days’ time, on the weekend of May 26th, in Saint Jean d’Angely, France.

Arnaud Tonus – “It feels amazing to be back on the podium. It’s hard to put the feeling into words actually. I just feel thankful. Really thankful. Thankful to my team, and to Yamaha, and all of the people who support me for sticking behind me through what was the toughest time in my career. To be back up here after all of that is so cool. I am so happy and especially because I had to fight really hard for this result. I was passed and I had to pass people back and fight really hard, and that just makes a result like this so much sweeter, to know that I fought for it.”

“I had a positive weekend. I had two good starts from a bad gate pick, especially on this kind of start. I had good speed this weekend. I finished fourth in the first race which was really good because I struggled yesterday, but I felt good today. Second race was really good again, I settled in fifth, but the entry into the wave section here is really tricky. There are rocks, ruts, kickers, no kickers, lots to consider and every lap you get there, the bike handles differently. I got kicked sideways on the last lap and slid it out. I lost five spots. I still reached my goal, so this is positive for the next races.”

I had an up and down day today. I got arm pump every time I went on the track so that made it difficult. First race I struggled a lot with my arms and I had a small issue with the bike at the end of the race. I finished ninth, which is not bad, but not good either. I had a better start in the second race, and I had a good rhythm but I struggled with my arms again. Sixth in the final race is not so bad for a come-back I think. It’s a starting point and from here we can build.”

“The result on paper was not what I wanted and it definitely does not reflect my speed. It reflects a mistake a made I made in Timed Practice where I was the only rider doing a cool transfer, but I went to wide and missed the line and had a big crash, so I struggled since that moment. I was feeling stiff this morning and then I crashed chasing the top-five on the first lap and was stuck under my bike. On a track like this it is really hard to come back so I fought hard for 15thplace and then in the second race I finished fifth. It’s not what I wanted, but I leave here safe. I will recover this week and will come back stronger next weekend.”