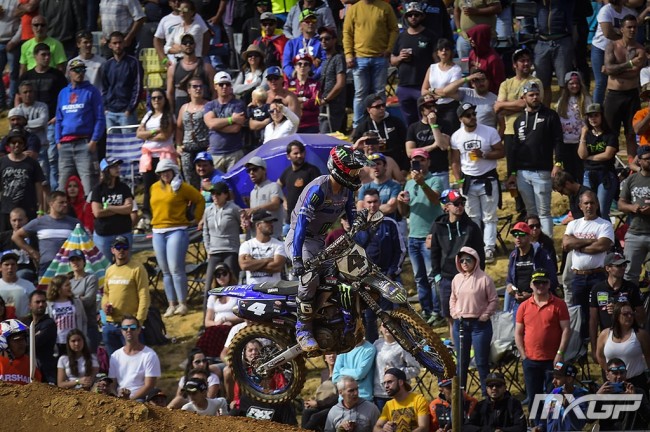 Arguably the most eye-catching of headlines from last weekend’s Grand Prix of Portugal was Monster Energy Wilvo Yamaha’s Arnaud Tonus first MXGP podium finish in two years and just the second of the talented Swiss’ career since joining the premier class in 2017.

Tonus went 3-3 at Agueda for the third step of the box in round six after missing the whole of the 2018 season with a shoulder injury; the latest in a catalogue of problems and illnesses that have marked the 27 year old’s presence at the highest level of the FIM world championship (he was briefly an MX2 title contender in 2013 when he won his first Grand Prix) and AMA Supercross with a blighted two year spell with the Monster Energy Pro Circuit Kawasaki team.

Tonus’ smile and the celebrations of the Wilvo crew conveyed intense joy (the Dutch crew have watched all three of their riders take podium honours since they formed in 2017) for what was #4’s first major prize since the 2017 Grand Prix of Trentino and first highlight since winning the opening moto of his home round that same year.

Tonus had actually started the ball rolling with a significant fourth position overall – again at Trentino – before the long five-week break in the current MXGP calendar. “It was a turning point for me,” he said of that 4-4 scorecard in Italy. “At last two solid motos. I just need race time and to get loose on the bike. It is about raising self-belief. I knew I needed the time. I had been riding stiff and not like myself. I’m hoping it can start to click for me now and I can be more efficient on the bike.”

The link with Gautier Paulin has been promising. The two are friends and while Tonus had half a term in 2017 and a winter before his 2018 ailment to get used to the YZ450F, the Frenchman has needed more hours to set-up his fourth different bike in the premier class. Wilvo have now swiped four podiums trophies so far in 2019 and Tonus has watched and gleaned some of the approach of his teammate. “Gautier has a lot of self belief, he has that mentality,” he describes. “It is his first year back on the Yamaha so there were things to adjust whereas I already had that base with the bike.”

Many questioned Tonus’ contract renewal for 2019, especially given the size and resources of the Wilvo set-up – that is widely rumoured to be receiving factory support for 2020 – but he has been able to vindicated the faith placed in him. In Portugal he became the seventh different rider to grace the MXGP podium this season. “I have been through a lot and it is cool to be up here,” he said in Agueda. “I just want to thank Louis [Vosters, Wilvo Team Principal] and all the people at Yamaha who stuck with me through the hardest time of my career. Being back up here is so cool and I am so thankful and happy.”