Tomac wins at Dungey’s home round! 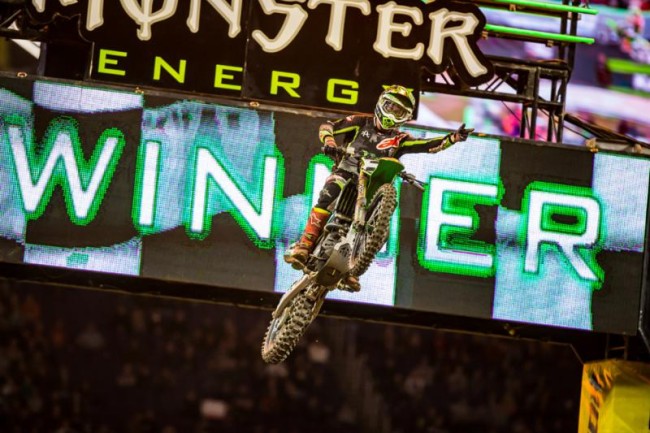 MINNEAPOLIS (February 18, 2017) – In front of a crowd of 50,721 fans Monster Energy AMA Supercross, an FIM World Championship, made its anticipated return to the state of Minnesota on Saturday night with its debut inside U.S. Bank Stadium. Following his worst outing of the season one week ago, Monster Energy Kawasaki’s Eli Tomac rebounded for his third victory of the season. In the opening round of the Eastern Regional 250SX Class Championship, Monster Energy/Pro Circuit/Kawasaki’s Joey Savatgy took the win to secure the early points lead.

As the field roared out the gate to start the 450SX Class Main Event it was Team Honda HRC’s Cole Seely who edged out Monster Energy Kawasaki’s Josh Grant for his first SupercrossLive.com Holeshot of the season. As riders jockeyed for position through the opening sequence of jumps behind Seely, RMATV/MC-WPS-KTM’s Davi Millsaps emerged from the fray in second, followed closely by Tomac and Team Red Bull KTM Factory Racing’s Ryan Dungey, the defending champion and current points leader. Seely then crashed out of the lead prior to the completion of the opening lap, handing the top spot over to Millsaps.

The veteran KTM rider held off heavy pressure from Tomac for a short time, but lost the position on Lap 2. Shortly thereafter, Dungey followed into second, dropping Millsaps to third. With the hometown crowd behind him, Minnesota native Dungey kept pace with Tomac on one of the toughest track layouts of the season. The lead duo’s early pace allowed them to open a comfortable gap over the rest of the field. Tomac continued to slightly outpace Dungey and soon opened a margin of more than a second just before the leaders approached lapped riders.

Tomac’s ability to efficiently get through the tail end of the field allowed him to extend his lead over Dungey, who started to lose ground to a his hard-charging KTM teammate Marvin Musquin, who earned his first career win one week prior. After starting sixth, Musquin methodically worked his way forward and moved into podium position past Millsaps on Lap 4. As the race wore on, the KTM duo inched closer and closer together until a mistake by Dungey forced him off the track briefly and allowed Musquin to mount a challenge. The Frenchman made an aggressive pass on his teammate just prior to completing Lap 18.

Tomac continued to log consistent laps through the remainder of the race and took the checkered flag 6.7 seconds ahead of Musquin for his seventh career win, lapping all the way up to seventh place in the 22-rider field. Dungey rounded out the overall podium in third.

“That was a really tough race tonight. The track had a lot of crazy lines and was really tough. I felt like we did a lot of laps,” said Tomac, who has won three of the last four races. “I’m glad to get back on our feet after last week [finishing 15th] and get back to where we were the weeks before that. This was the toughest race of the season so far.”

Dungey’s third-place finish allowed him to maintain his control of the championship standings.

“We were pushing it, Eli [Tomac] was going good,” said Dungey. “We were right there, but then I [had a slight miscue] and he took off. I made some [more] mistakes and Marvin [Musquin] was there to capitalize. It was a tough night, but we made the most of it and got on the podium.”

Dungey lost ground to Musquin in the 450SX Class standings and now holds a 16-point lead over his teammate. Tomac moved from fourth to third, 24 points behind Dungey.

In the first Eastern Regional 250SX Class Main Event of the season, Troy Lee Designs/Red Bull/KTM’s Jordon Smith earned the first SupercrossLive.com Holeshot of the championship, just ahead of Savatgy and Yamalube/Star Racing Yamaha’s Colt Nichols. Smith was able to pull away on the opening lap after Nichols and KTM rider Dakota Alix came together in mid air while battling for second, crashing in front of the field. That moved Savatgy into second and Venex MX/MTF/Yamaha’s Anthony Rodriguez into third, with GEICO Honda’s R.J. Hampshire fourth and Rockstar Energy Husqvarna Factory Racing’s Zach Osborne fifth.

As the opening laps continued, Smith and Savatgy asserted themselves out front, while Rodriguez dropped two positions to both Hampshire and Osborne. The Husqvarna rider then applied pressure on Hampshire for third and moved into podium position on Lap 5. Out front, Savatgy closed in on Smith and the two began to battle for the lead as they approached lapped riders. Savatgy was patient for several laps and made an aggressive pass just prior to the track’s lone triple jump on Lap 9. The two riders appeared to make slight contact, slowing their momentum enough to where neither could complete the obstacle. Savatgy took advantage of his inside position in the following corner and seized control of the race.

The battle for the lead allowed Osborne to close the deficit in third and soon all three were separated by less than a second. Lapped riders continued to play a role, helping Savatgy maintain his lead while also allowing Osborne to slip past Smith for second on Lap 10. Just a few laps later Osborne tipped over in the track’s sand section and gave up the spot to Smith, remounting in third. The lead trio still was separated by less than two seconds on the final lap, with Savatgy taking his fourth career win, and his second in a row dating back to last season.

“I was able to start closing in on Jordon [Smith], and would have liked to make the pass [clean] to keep my flow going. But, we made pass and make it work from there,” said Savatgy. “It wasn’t a pretty Main Event by any means, so we still have work to do. It’s good to start the season like this. I didn’t ride my best, but we still got the win.”

Smith recorded a career-best finish in second, while Osborne settled for third following his mistake.

Savatgy took early control of the Eastern Regional standings and holds a three-point lead over Smith. Osborne is five points back in third.

The 2017 Monster Energy Supercross season continues next Saturday, February 25, with the eighth round from Atlanta’s Georgia Dome. The championship’s final visit to the famed venue will signify the inaugural MotoFest, featuring the first-ever doubleheader alongside AMSOIL Arenacross. Supercross can be seen live on FS1 beginning at 4 p.m. PT / 7 p.m. ET.