Tomac v Baggett v Musquin – the 450 AMA motocross title is back on! 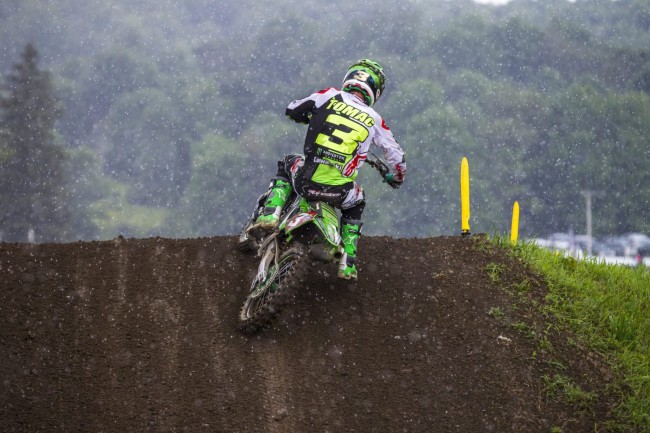 It wasn’t the best day at the office for Eli Tomac last weekend at Unadilla and he is just one poor moto away from Marvin Musquin and Blake Baggett potentially stealing the title from his grasp!

Musquin has been on rails recently winning the last six motos in a row and the last three overalls. The recent tracks have suited Musquin’s technical style while Tomac’s pin it to win style didn’t quite have the desired affect.

But at Budds Creek Tomac will have to come back with all guns blazing to stop the final round being a tension filled day of potential drama!

Speaking about his day at Unadilla, Tomac remained positive and admitted he was just glad to get through unscathed: “I’m glad to get through today. The weather was crazy and made conditions extremely sketchy. I’m just happy to be in once piece and holding the red plate.”

We all know just how incredibly fast Tomac can be when he is,”on,” but the momentum is all on Musquin’s side even though Tomac leads the series. The pressure is on Tomac not to lose the title and he needs to to start winning to prevent further loses – Budds Creek is a big race for the Kawasaki man in terms of momentum for the final round.

In contrast Musquin has nothing to lose and everything to gain. He is now 31 points behind Tomac, but he will be rueing his 2 DNFs and his knee injury that could ultimately be why he comes up short in this championship. But win or lose Musquin has emerged from under the shadow of Ryan Dungey this summer, he is rising to the challenge of being the team leader at KTM and his confidence is sky high – a dangerous combination for his rivals.

Blake Baggett meanwhile has hung strong despite a thumb ligament injury that is affecting his practicing ability, but is still only 26 points off his bitter rival Tomac. Baggett hasn’t been on the same form since before his injury but is still riding well and the potential of a title might just numb the pain a little more during the adrenaline-filled two motos at Budds Creek.

It’s the battle for the title at Budds Creek – 31 points separate the top three with four motos to go!