Tomac talks about A2! 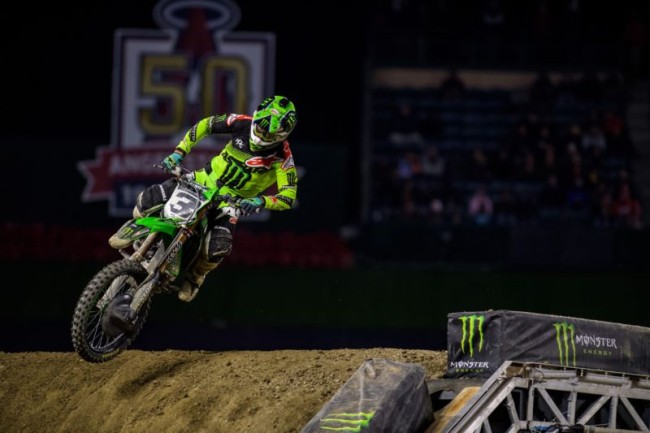 Kawasaki PR – Foothill Ranch, CA (January 22, 2017) – The Monster Energy Kawasaki team of Josh Grant and Eli Tomac arrived in Anaheim, California for the second time in 2017 for Round 3 of the Monster Energy AMA Supercross, an FIM Championship. Tomac began the night show as the fastest qualifier and a third place finish in the first heat while teammate Grant advanced to the main through Semi 2. As the 450 Main Event started, Grant rounded Turn 1 in fourth with Tomac in tenth. Grant continued racing for fourth position while Tomac began moving forward through the pack. Throughout the 20-minute Main Event Tomac and Grant battled for position, with Grant eventually finishing a season best of sixth and Tomac taking the checkered flag in eighth.

“I’m obviously happy with this race,” said Grant. “I had a great start and it felt really good being able to run up front. If I can continue to get out of the gate like that I’ll be able to run up at the front for the whole race. Later in the race the lines developed a bit and that made it hard to make passes. I made a small mistake that cost me some, but overall I’m happy. I will keep pushing to do better and build on this solid result.”

“The day started off strong,” said Tomac. “I was fastest in the afternoon, I qualified for the main out of my heat and was ready to compete. My jump off the line was strong but I was pushed around and had to settle in mid pack. I had a hard time getting my rhythm today. I made a few passes but it wasn’t where we’re supposed to be. I know we should be up front, we will get back to work and keep fighting for the top of the podium.”

Monster Energy/Pro Circuit/Kawasaki rolled into Angels Stadium with Justin Hill and Austin Forkner ready to race for the win. Forkner started the night off by taking the first heat win of his career in Heat 1 while Hill qualified for the main with a third place finish in Heat 2. Achieving yet another career first, Forkner grabbed the holeshot of the 250 Main Event aboard his KX™250F with Hill rounding Turn 1 fourth. The racing stayed tense with Hill battling for position and taking the lead by the end of the first lap while Forkner slipped to fourth. At the front of the field Hill proceeded to click off consistently fast times, opening up a gap of over five seconds before taking the win. Forkner earned the best result of his career with a fourth place at the line.

“The weekend ended great,” said Hill. “It’s funny because I started the day feeling off, but when the main comes around and there’s points on the line, it’s go time. I let it all hang out on the track and I was able to do it confidently. When I took over the lead I didn’t expect to get it at that time, it came faster than I thought and I just went with it. I’m excited about the rest of the season and about right now.”

“I was charging pretty hard in the first lap,” said Forkner. “I was stood up a couple times and then made a mistake in the whoops and went back to fourth. Most of the race all happened in the first couple laps for me. If I was able to get the first few laps clean I would have had a better result. After I started riding smoother, I was able to match the pace of the riders in front of me and I feel really confident moving forward.”