Tomac talks about a disappointing Texas 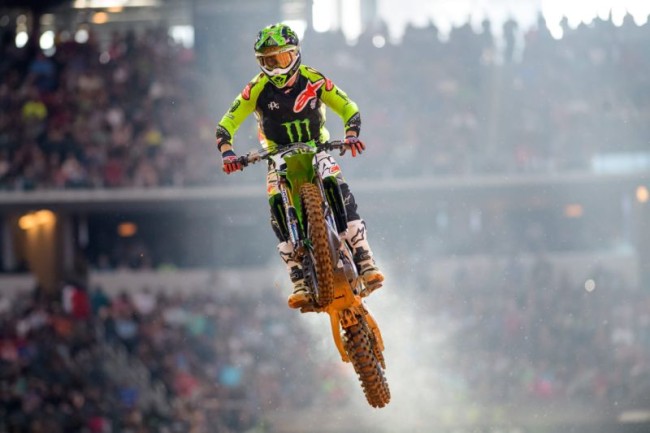 Foothill Ranch, CA (February 12, 2017) – The Monster Energy Kawasaki team pulled into AT&T Stadium for Round 6 of the 2017 Monster Energy AMA Supercross, an FIM World Championship season with Eli Tomac focused on the championship. Tomac started the day as the fastest qualifier, and followed up with a dominant win in Semi Race 2. At the start of the 450SX Main Event Tomac rounded the first turn inside the top ten and began working his way through the field. As the race heated up, Tomac worked his way into third position. While in third, his front brake locked up, and as a result Tomac went down and was forced to pull into the mechanic’s area for repairs. Tomac re-entered the race and fought until the end. As the checkers flew, Tomac scored valuable Monster Energy Supercross Championship points, earning 15th place.

“We started off really well today,” said Tomac. “We had some trouble in our heat but recovered strong in our semi. In the main my start after the red flag was much better. I felt pretty strong until my front end issue. I knew that recovering as best as possible could be key at the end of the championship, so I dug deep and fought all the way to the end. It’s a long season and we still have a lot of laps left.”

During intermission, Kawasaki presented a $20,000 donation to the Road 2 Recovery Foundation, helping grow their injured rider endowment. The donation was funded by some of the proceeds from the sale of a Ninja H2™ Carbon motorcycle.

Monster Energy/Pro Circuit/Kawasaki teammates Justin Hill and Austin Forkner earned a 1-2 finish, with Hill earning his fourth straight victory and Forkner claiming the best finish of his Monster Energy Supercross career in second. Hill put the competition on notice with the fastest time in qualifying and earned the win in 250SX Class Heat Race 2 with Forkner crossing the line in third. The No. 46 of Hill carried the series points leader red number plate into the 250SX Class Main Event and as the gate fell Hill and Forkner rounded Turn 1 in fourth and fifth respectively. Hill quickly pushed towards the front and began to settle into second with Forkner in tow. With three minutes remaining Hill began to close the gap on the leader with Forkner closing the gap to Hill. In the closing laps the leader went off the racetrack, Hill and Forkner both capitalized and took the checkered flag in first and second place respectively.

“Today was awesome,” said Hill. “Fastest qualifier, won my heat after a great battle with Austin and capped it off with a victory in the Main Event. My start was pretty solid, I worked my way up through the field and unfortunately the leader had bike issues, but I was there to capitalize and I’m happy with another win. Four in a row and the red plate going into the break feels good!”

“I had a lot of fun today,” said Forkner. “I was pumped to leave the west coast races behind and race on some dirt I’m used to. I trained in Oklahoma all week and had some fun before heading to Texas for this weekend. I’m obviously stoked on my best supercross finish yet, and now I get to take some time off before heading to Seattle.”