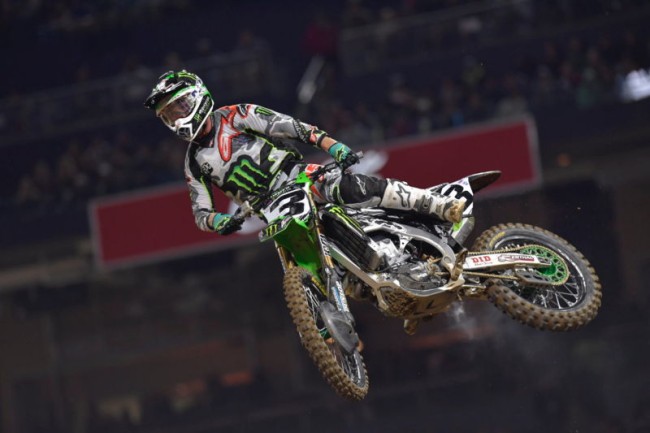 Foothill Ranch, CA (January 15, 2017) – Round 2 of the 2017 Monster Energy AMA Supercross, an FIM Championship kicked off with a military appreciation celebration at Petco Park in San Diego, California. Eli Tomac and Josh Grant prepared to race aboard their KX™450F motorcycles adorned in special camouflage graphics in support of the military. Tomac started off the night finishing second in 450 Heat 1 while Grant transferred to the Main Event finishing second in 450 Semi 1. As the gate fell for the 450 main Tomac rounded Turn 1 in fifth with Grant in 15th.
Tomac fell back to eighth but immediately raced back up to fifth within the first thee minutes. At the halfway mark Tomac passed for fourth with Grant racing towards the top ten in 11th. As the race ran on, Tomac dropped back to sixth where he would remain until the checkers, with teammate Grant finishing 11th.

“The day started off well,” said Tomac. “I had a great start in Heat 1 and lead for the majority of the race. My jump out of the gate in the main was great but I let off early and came around Turn 1 inside the top 10. I quickly made my way into the top five but just hit a wall around the halfway mark and lost my momentum. Overall we learned a lot tonight and it’s only the second race, lots more to come.”

The weekend isn’t exactly what we wanted, but there are still a lot of positives to take out of it,” said Grant. “I went down in the first heat but bounced back with a solid second in my semi. In the Main Event I started 15th and worked hard to get up to 11th, which is really all the track would allow for. It was really difficult for anyone to make up a ton of time on this track.”

Monster Energy/Pro Circuit/Kawasaki teammates Austin Forkner and Justin Hill arrived in San Diego looking to build momentum off last weekend’s results. Hill started off the weekend doing exactly that, entering the night show as the fastest qualifier and winning 250 Heat 2 with his stablemate Forkner also advancing to the main event in third. As the gate dropped for the 250 main, Forkner rounded the first turn in fifth with Hill in seventh. Forkner wasted no time battling for fourth, his rookie status not keeping him from racing hard against the veterans. Hill spent the first four minutes racing up to Forkner before making the pass on his teammate. Shortly after, both Hill and Forkner moved into fourth and fifth respectively. With seven minutes remaining Forkner dropped to sixth. As the clock counted down and with just over three minutes remaining, the battle at the front heated up with Hill racing hard and taking third place. As the clock dipped below the one-minute mark, Forkner reclaimed fifth place and Hill took over second place. As the white flag flew, the race intensified to the end with Hill crossing the line a close second and Forkner rounding out the top five in fifth.

The day was definitely an improvement,” said Hill. “My KX™250F was fastest though qualifying and I won my heat. I didn’t get a great start in the main but pushed for the entire race and earned second. It feels great to be back on the podium and after tonight, I know I can win.”

“We got a lot faster as the day went on,” said Forkner. “A few changes to the bike throughout the day lead to being able to loosen up and ride better. In the heat we got the holeshot and raced really hard for third. In the Main Event we had a great start but tangled with another rider and dropped back to eighth. I felt a little tight but made some solid passes and overall rode well. The lap times were competitive and we’re making progress, so we are happy so far.”