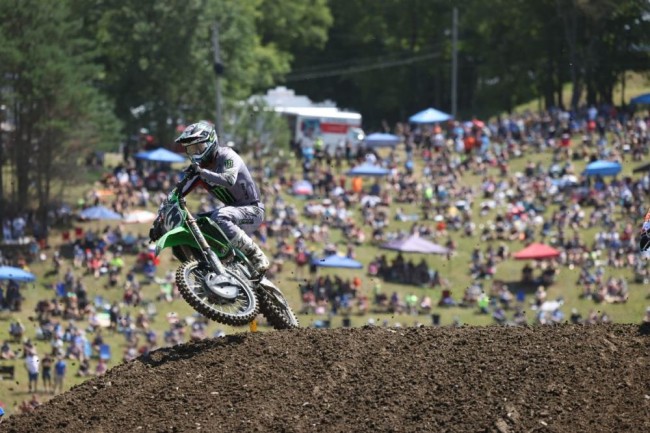 Foothill Ranch, Calif. (August 15, 2021) – The AMA Pro Motocross Championship resumed after a two-week hiatus for Round 8 at the iconic Unadilla MX in New Berlin, New York where Monster Energy® Kawasaki’s Eli Tomac scored a first moto podium on his way to fourth overall. In the 250 class, Monster Energy®/Pro Circuit/Kawasaki riders Austin Forkner and Jo Shimoda finished the day in 13th and 16th, respectively, while their teammate Seth Hammaker made his return to racing with 17th overall

Eli Tomac: In the first moto I had a good start going around the first corner but, I had to check up to avoid a crash at the front and got shuffled back a few positions. From there I went straight into the fight and worked my way to fourth before another rider crashed and gave me third. I was riding well, my body felt good, and I was hitting the right lines around the track. Finishing third in Moto 1 put me in a good spot for the overall and gave me solid gate selection for Moto 2. In the second moto I moved further inside for the start, but that choice didn’t pay off because I came out a little further back in the pack and was having a hard time moving forward. It was a difficult track with a lot of ruts that changed throughout the day. In the morning the track was really soft, so ruts formed up all over the place, but later in the afternoon the dirt got hard and dry with a crust on the ruts which required challenging adjustments. It’s frustrating that I only made it up to seventh in the second moto, but at least we had that podium finish in Moto 1.”

Austin Forkner: “I am happy with how I rode the second moto given the circumstances. I was sore from my crash in Moto 1 and didn’t have a good gate pick, but I made the most of the situation. I was way outside on the starting gate so, even though I got a great jump, I still came out somewhere around 20th. I made a lot of passes and finished only a few seconds behind fifth. It took me a little while to get up to speed at the beginning of the moto because I was dealing with some pain but, if I had been able to get to my pace sooner, I feel confident I could have scored a top-5 finish. That is the goal right now, to string together two solid motos with consistent riding and we can build up from there.”

Jo Shimoda: “The track was very technical today, but I was able to ride with good speed every time I was out there. In practice I qualified fourth and was comfortable with all of the ruts on the track. In the first moto, my start was not great, but I raced hard for the whole moto and almost made the pass for sixth at the finish. There are a lot of positive to take away from the day and we will continue to push forward.”

Seth Hammaker: “I’ve been looking forward to my first race back here at Unadilla. I felt great in qualifying and had the third-fastest lap, so I put myself in a good position at the start of the day. The track was gnarly with all the different ruts out there. In the first moto, I got off to a decent start and was running top-5 until I had a small crash that pushed me back to finish in ninth. Regardless, I still felt pretty good and was looking forward to Moto 2. I got off to a better start in the second race and was up in the top-5 again feeling solid until about 20 minutes in when I had a crash. I broke my clutch lever off during the crash, so it took me a while just to get back on the track and get going again. All in all, it was a great learning day and, if I can prevent those mistakes going forward, I feel confident I’ll be in that top-5 and fighting up front.”