Tomac on his podium at the USGP 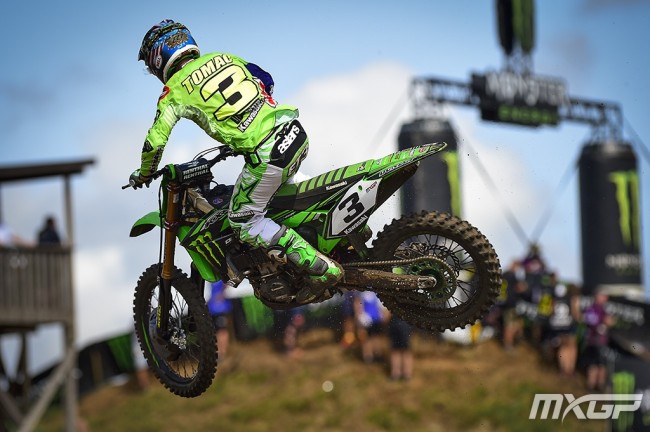 Eli Tomac recorded an outstanding race win for the Monster Energy Kawasaki Racing Team at the US round of the FIM World MXGP Motocross Championship at Jacksonville in Florida.

One week after clinching the US national motocross title the Colorado resident took time to find the most suitable settings and had to be satisfied with twelfth place during qualification, but he entered the point-scoring motos on race day with renewed confidence after a good training session on Sunday morning. Taking the lead with a sweeping outside pass in the long first turn he immediately set a terrific pace and soon held an advantage of more than ten seconds over the chasing pack; at the finish he was nearly thirty seconds ahead to record his fifth consecutive victory as a wild card entry in the world series. Although through to third after a couple of laps in race two the twenty-four year old soon recognised that it would not be possible to haul in the two riders ahead of him and settled for third position in the moto, a result which secured second place overall.

Clement Desalle arrived with his confidence high after a double-race win in his Belgian homeland one week earlier and the KX450F-SR also brought him two excellent starts but he never felt comfortable in the claustrophobic heat and humidity which greeted the competitors in Florida. After holding fourth place early in race one, he eventually finished ninth, and the extreme weather conditions again took their toll in race two as he finished eighth. Seventh overall in the GP, Clement remains fourth in the series standings but is now just one point away from third with two GPs remaining.

Jordi Tixier returned to GP action for the first time since July and inevitably he also suffered in the extreme heat. The Frenchman crashed in both motos but persevered to finish eighteenth in race two. Unfortunately his bike was too badly damaged to continue in race two after holding thirteenth position for more than half the race.

Eli Tomac: “Yesterday we just weren’t on the pace but the two-day format worked in my favour to have time to feel comfortable with my settings. The sandy base threw us at first, but we found some solutions this morning; warm-up went well and then I knew that with a good start I could run with them. The first moto I got out front early, put in some fast laps and had a good rhythm. I got to third fairly quickly in race two, but those two guys out front were setting a hot pace and I lost contact; there were a couple of sections where they were doing things I just didn’t feel confident with, so third was all I had in me that race.”

Clement Desalle: “For sure I was expecting a better result, but I didn’t felt comfortable on such a flat track with many jumps and I struggled with the heat and humidity; in the first race I was in fourth position during the first few laps but I couldn’t maintain the rhythm until the end. My second start was even better; I was second in the first long and fast corner but I was on the outside, rode into a soft section and lost four positions. I was sixth for most of the race, not far from Strijbos, but in the last six minutes I struggled with the heat again and lost two positions. I’m still fighting for top three in the series and I’m confident as we go back to Europe for the last two GPs.”

Jordi Tixier: “It was a very difficult weekend for me; it was not easy to come back to racing after six weeks of recovery in this heat and humidity. I crashed in both motos; all these crashes are frustrating but luckily I’m safe and I will do my best to end the season with some good results.”