Tomac on his first win of the year! 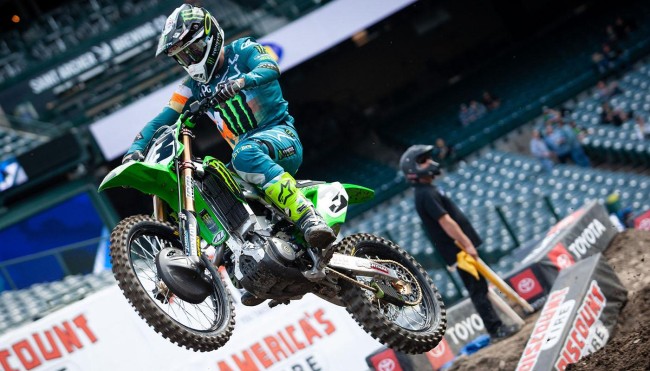 The real Eli Tomac finally showed up at the third round of the supercross season! Tomac once again didn’t get a great start, but his corner and whoop speed were on point and he fired through the field to pass title rival Ken Roczen for the lead and managed the race from there as the track broke down.

“Man, it was just believing in myself and riding good throughout the day, said a visibly relieved Eli on what it took to win after two average races to start the year. “Looking back at A1 that was just a wash for us, riding around in tenth place, last week was not giving us a chance at all being so buried on the start.

“Tonight I wasn’t right there on the start but close enough to be in the start, I was really making up a lot of time in the whoops probably up until the cross flags there (halfway point). It just got really hard, the whoops kept breaking down, the 450s absolutely pummel that track.  The last half was definitely some management going on. Just thankful to be back up here and fighting for some wins.

“(For next weekend) Just keep doing what we are doing, the Triple crowns are tough, they’re stressful you have to perform in all of those races. A heat race sometimes you can get warmed up for the night but in the triple crown the first race matters, you gotta be ready for those”.

On his starts, Tomac said he still wants to improve. “I can’t rely on that inside gate every week! So I still have to get better at those, I think I came out tenth or something again, still gotta get better at that.”