Tomac on his collision with Barcia: That’s racing! 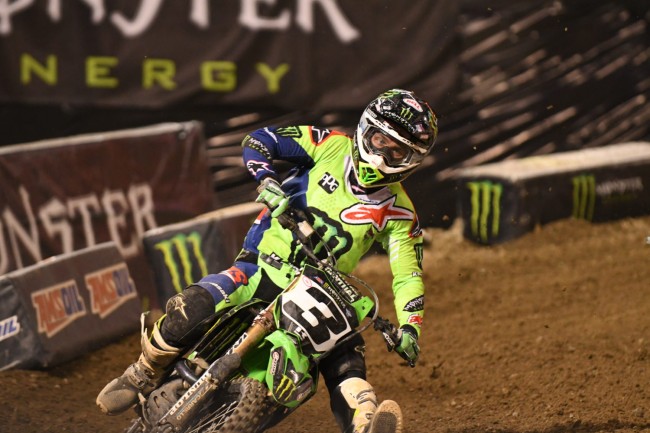 PR- Round 5 of Monster Energy® AMA Supercross, an FIM World Championship kicked off Saturday afternoon at the Oakland Alameda County Coliseum in Oakland, California. Monster Energy Kawasaki riders Josh Grant and Eli Tomac qualified directly out of 450SX Heat Race 1 with Tomac finishing second and Grant fifth on a rutted and difficult course. As the gate dropped on the 450SX Main Event, Tomac and Grant circled the opening lap in seventh and eighth, respectively. While making moves towards the front, Tomac collided with another rider at the end of the third lap. Tomac remounted his KX™450F in 20th position and began his long climb back up to the front on the grueling, technical track. Grant held on to finish 10th place with Tomac close behind in 13th place.

Today was a rollercoaster,” said Tomac. “I struggled all morning with the track conditions and I couldn’t put in one clean lap in timed qualifying. I felt better in the heat race and heading into the main event we made a small change which would have helped if I hadn’t got tangled up with a few riders and gone down. There’s nothing we can do, that’s racing and we’ll rebound next week.”

“Today went well,” said Grant. “I think we made a lot of progress during the week and I felt comfortable on the bike all day today. I just need to eliminate some of the mistakes and I’ll be where I want to be.”

Monster Energy/Pro Circuit/Kawasaki riders, Joey Savatgy and Adam Cianciarulo began the evening on the right foot as Cianciarulo set the fastest time in qualifying and both riders qualified second out of their 250SX heat races. At the start of the 250SX Main Event, Savatgy was fourth, while Cianciarulo had another rider go down right in front of him, setting him back to 19th on the opening lap. Savatgy made the pass for third place on Lap 3 and immediately began pressuring the leaders. Savatgy was forced to play both offense and defense for 19 laps as he attempted to keep his KX™250F in a podium position. When the checkered flag flew, Savatgy crossed the line in second place, while Cianciarulo showcased an incredible come-from-behind performance to finish in seventh place. Savatgy has now moved up to second place in the 250SX Rider Point Standings and sits just three points out of the championship lead.

“Overall, it was a good weekend,” said Savatgy. “I felt we improved throughout the day and put it all together when it counted. I’m pumped on the finish and moving up to second in the points.”

“I felt really good today,” said Cianciarulo. “I qualified on pole again and finished second in my heat. Unfortunately, the opening lap in the main event didn’t go my way and I ended up having to fight my way through the 19-lap main. I’m glad to be leaving here healthy and I’m looking forward to racing San Diego next weekend.”